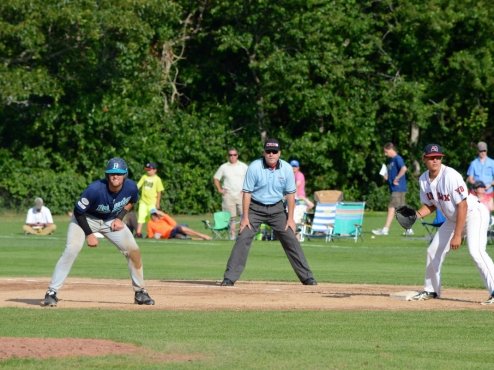 SOUTH YARMOUTH, Mass. ? The Yarmouth-Dennis Red Sox cruised to a 7-3 victory on Tuesday to sweep the Brewster Whitecaps in the first round of the East Division playoffs.

Ricky Thomas (Fresno State) earned his eighth win of the season and pitched six full innings. The Y-D pitching staff pitched from ahead all day, holding the Whitecaps scoreless until the eighth inning.

Thomas earned the win, struck out seven batters, and allowed five hits. He has only allowed five runs in 50.1 innings of work this summer. When asked whether this start, being a playoff game, felt different than his others, he said, ?I just kept it the same. I just threw strikes because it was just another day at the ballpark that I?m trying to win.?

Alec Eisenberg (Hofstra) and Dalton Lehnen (Cincinnati) came in for relief and both had solid performances Eisenberg is credited with all three runs and six hits in 1.2 innings of work. Lehnen pitched 1.1 innings without allowing a hit.

The biggest highlight was first baseman Ryan Noda (Cincinnati). Noda has been in and out of the lineup over the past few weeks but got the start today and made the most of the opportunity. Noda went 2-for-4 with a two-RBI double and a solo home run.

He ended the season on a 4-for-38 streak with 19 strikeouts but turned it around in his first playoff start. He said, ?It felt good. I just kept sticking to my plan. As a hitter that?s all you?ve got to do. I always bring a good mindset to the game and I?m always going to work hard. It?s just like a regular game.?

The Y-D Red Sox have relief on their pitching in recent wins but, on Tuesday, they were able to pair it with offensive efficiency.

Y-D will continue their journey back to the title game on either Wednesday or Thursday night, depending on the result of the Chatham Anglers and Orleans Firebirds? series. Stay updated on game times and locations at www.YDredsox.org.