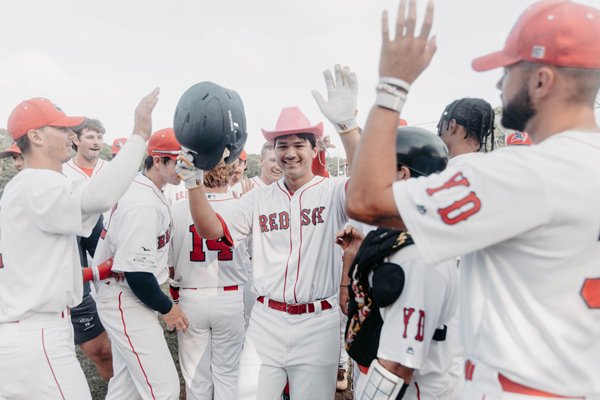 The Y-D Red Sox hot stretch of play came to a screeching halt on Saturday at Red Wilson Field, losing to the Wareham Gatemen 11-3.

Heading into the game, the Red Sox had not allowed more than four runs in a game this season, especially impressive considering that they are just a few games shy of the halfway point in the season.

The Sox staff struggled with big innings today, however, giving up multiple runs in four innings, including five in the fourth.

Starter Jared Lyons entered the day having not allowed a run in 15 innings this season but struggled with his command and consistency early. In the third, he gave up a two-run home run to Hogan Windish to snap his scoreless innings streak at 17.2.

The top of the fourth was disastrous for the Red Sox. After giving up a second home run and issuing his third walk, Lyons was pulled for Bryce Collins. Collins fared no better, walking three straight batters to force another run in before a quick exit of his own.

Matt Kavanaugh came in and tried to limit the damage, but two singles scored three more, putting the Sox down 7-0.

This was the type of inning that Y-D has been able to avoid throughout the season, but couldn’t get on top of on Saturday.

“Our pitching has been so good, it’s bound to happen,” Y-D Field Manager Scott Pickler said after the game. “That’s the best part about this game, they get to come back again tomorrow.”

Y-D was able to get the bats going in the bottom of the fourth with the help of a defensive miscue.

With two outs and no one on, Mike Boeve blooped a popup into shallow left field. Shortstop Blake Wright seemed to have it in his sights, but it popped out of his glove, allowing Boeve to reach.

Caden Connor then ripped an RBI double off the fence in right, and Jonny Long followed with his second home run of the season to make a dent in the Gatemen lead.

Wareham added two more in the sixth to widen the gap. Conner Thurman pitched two perfect innings in the seventh and eighth, striking out three of the six batters he faced.

In the ninth, Pickler went off-script, sending Luke Franzoni on the mound to pitch. Franzoni hadn’t pitched in a game since March 16, 2019, when he allowed 1 ER in 0.2 innings for Xavier. The Gatemen got to Franzoni, scoring twice on four hits.

“It was really fun,” Franzoni said with an ear-to-ear smile. “I was really excited to get to do it, just try to throw strikes, that’s basically it.”

Y-D still sits atop the East division by five points at 11-6-2, as the matchup between Orleans and Brewster was rained out, giving neither side the opportunity to gain ground in the race.

The Sox begin a home-and-home tomorrow with the Hyannis Harbor Hawks, first traveling to Hyannis before hosting them on the Fourth of July. Tomorrow’s first pitch is set for 6 p.m.