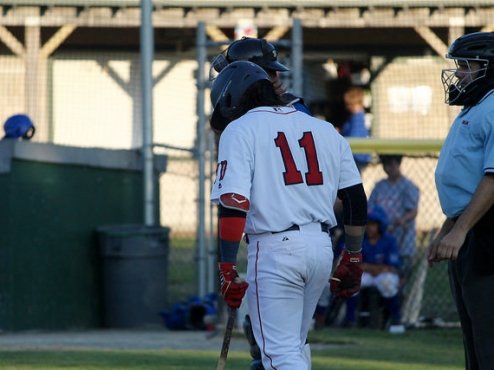 rn By Michael McClearyrnrnDrew Mendoza?watched once again as the game collapsed right before his eyes. ?Just a day earlier, on Monday, he waited on deck as Nick Quintana swung and missed on a ball for the final strike of the game. With that in his mind and hoping that Tuesday’s?game would be different, he followed with his eyes the final pitch of the game into the glove of the Hyannis catcher. ?It was a called strike three, one he didn’t agree with, but he kept composed and walked to the dugout. ?For the second?straight game, the distance was shorter. ?Just a few moments earlier, he stood directly adjacent in the on-deck circle.rnrn”I always want to hit,” Mendoza?said. “I’m just ready to get my chance.”rnrnTuesday’s 4-0 loss to Hyannis marked the third straight game in which Y-D failed to score a run. ?Over the course of the team’s three-game?losing streak, each of the losses ended in a 4-0 score. ?The three hits the Red Sox had is a low over that span.rnrn”We’ve been struggling as a team at the plate,” Mendoza said. “We’re losing a bit of confidence, we’re trying to gain a little bit of that back.”rnrnMendoza said that he thinks these struggles are temporary, noting that he thinks that the Red Sox are the best hitting team he’s ever been a part of and he continues to believe that even through its struggles. ?This is saying a lot as Mendoza plays his collegiate baseball at Florida State which ranks in the top five in the nation in total runs.rnrnStill, Tuesday was an offensive performance filled with disappointments. Alex McKenna, who has been invincible to the Red Sox offensive woes over the past few games, failed to record a hit and snapped his eight-game hitting streak.rnrnThe Red Sox couldn’t threaten at all in the game, recording only four baserunners in the game and allowing only one of them to reach third the entire ball game. ?Despite the identical outcomes of the past two contests, Manager Scott Pickler didn’t sense much of a pattern.?rnrn”We didn’t score any runs, that’s it,” Pickler said of the games’ similarities. ?“That’s the only thing.”rnrnEarly on in the game, in the third inning, the Red Sox showed signs of life, threatening with Nico Hoerner on third. Carlos Cortes, who is batting .294 and has been an efficient?hitter all season was up with a chance to bring Hoerner home. ?rnrnHe slapped the ball to the Hyannis second baseman who fielded it cleanly and threw it to first for the final out of the inning. Hoerner slowed his run to a jog and turned away before touching the plate. ?It was the closest a Red Sox baserunner?would get to touch it all game long.?rnrnCortes crouched down and begun taking off his equipment slowly. ?He banged his helmet off the ground a few times and threw the rest of his batting attire into it.rnrnHe knew that was his chance break the scoreless streak, now at 28. And he knew he didn’t get it done.rnrn”I expect a lot out of myself,” Cortes said. “Not being able to push that run in, I kind of gave myself in.”?rn