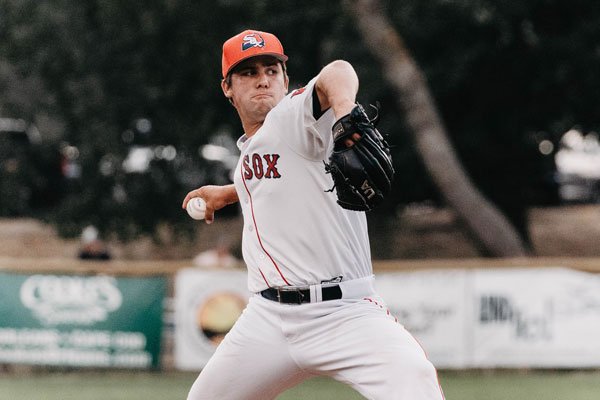 It was a pitcher’s duel early at Eldredge Park Friday night, as the Yarmouth-Dennis Red Sox and Orleans Firebirds battled out for out. But the Firebirds took a late lead on an RBI fielder’s choice in the seventh inning and never relinquished, handing the Red Sox a 4-1 defeat.

The loss was Y-D’s fourth in a row, their longest losing streak of the season. With Brewster winning earlier in the day, it kept Y-D’s magic number at three to win the East Division. It also handed the season series to Orleans, 3-2-1.

The Red Sox amassed just four hits, and despite four errors from the Firebirds, they managed just the single run. Y-D stranded seven runners on base.

Eric Yost pitched 5.1 strong innings out of the bullpen for Y-D, who used Dom Freeberger as an opener for the first 1.2 frames. Yost struck out six, allowed three hits, and gave up just one earned run, keeping Y-D in the game despite the offensive struggles.

“I thought Yost threw really well, and [Mike] Boeve made two nice defensive plays,” Y-D Field Manager Scott Pickler said, adding that the team is “a bit thin right now” with a few players out due to minor injuries.

The Firebirds tallied an early run off Freeberger, who surrendered a solo homer to Connor Burns in the second. On the other side, the Y-D offense struggled, with just one hit through five innings. Orleans starter Gray Harrison kept the Sox in check, pitching five stellar innings before being pulled after one batter in the sixth.

That one batter was Homer Bush Jr., who lined a double down the left field line to force Orleans manager Kelly Nicholson into a pitching change. After a perfectly-placed bunt single by Caden Connor off Collin Kramer, Bush scored on an RBI fielder’s choice from Hayden Schott to tie the game at one.

But that run was all the Y-D offense could muster. It put the pressure on Yost, who continued to pitch well into the seventh. He ran into some trouble with one out, as the Firebirds loaded the bases, but he got the groundball he needed. It was tapped right back to him, but Yost threw to second rather than home, and the Sox couldn’t turn the double play in time to get Isaac Humphrey at first, allowing Orleans to take a 2-1 lead.

The Red Sox nearly tied it up in the top of the eighth. With two outs, Braden Montgomery lifted a long fly ball to right. It looked as though it may drift over the fence, but Humphrey made a leaping grab on the warning track. It robbed Montgomery of at least extra bases, and possibly the tying home run.

Immediately after the catch, the Firebirds added to the lead with a two-run single off the bat of Cam Jones in the bottom of the eighth. It was the nail in the coffin for the Red Sox, who got two runners on in the ninth but couldn’t bring either one home.

The Red Sox could end up facing Orleans in the first round of the playoffs — the Firebirds are tied for third with Harwich in the East Division, with Y-D holding the top spot. It’s quite possible these two foes aren’t quite done with each other, and Pickler let his team know that.

“We just need a timely hit, and we’ll be fine,” Pickler said. “We’ll have our guys ready.”

The Red Sox head down to Falmouth Saturday night to face the Commodores for the final time this season at Guv Fuller Field, with first pitch at 6 p.m.