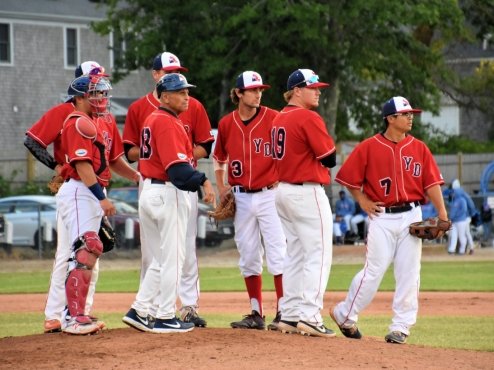 CHATHAM ? Coming off of a tough win in Brewster on Sunday, the Red Sox struggled from the start against the Anglers at Veteran?s Field on Monday night. Not only did the bats go quiet, the pitching staff gave up an abundance of hits and dug Y-D into an early hole.

Carlos Lomeli (St. Mary?s) was on the bump for the Red Sox to start the game. He got off to a rather shaky start, giving up a leadoff home run to Kaden Polcovich (Oklahoma State). A scary moment occurred just two batters later, when Lomeli appeared to have injured his finger after throwing a pitch.

Brady Corrigan (Arizona State) took over after the injury and got the Red Sox out of the first inning while only surrendering the one run. The runs began to pile on in the home half of the second, however, as Jamal OGuinn II (USC) hit a two-run double after a run had already scored on a wild pitch. It was just the beginning of a 4-RBI day for OGuinn II.

Following the rough couple of innings, Ledgend Smith (Oklahoma) was given the ball for the third and looked promising. He struck out the first two batters he faced, and completed the 1-2-3 inning with a fly out. When he returned for the fourth, Chatham put this game completely out of reach. The inning featured yet another two-run double off the bat of OGuinn II, which was just part of the five runs the Anglers added to the board.

Michael Weisberg (Cal St. Fullerton) saw action in the fifth inning, where Chatham continued doing more of the same. They put up four runs in the inning, bringing them to a 13-0 lead which they held through the sixth. Adam Jeannette (Mercyhurst College) gave the Red Sox a breath of fresh air in the sixth, throwing a perfect 1-2-3 inning while striking a batter out.

Eventually, the Red Sox decided to turn to a few position players to take the mound, starting with Drew Swift (Arizona State). The bad news was that Paxton Wallace (Wichita State) hit a two-run home run off of Swift to extend the lead to 15-0. The good news, Swift was able to strike out the side; an extremely impressive accomplishment for a positon player.

The experiment wasn?t done, as positon player Sam Hall (Clemson) got a chance to pitch as well. Although he didn?t strike anyone out, he was able to get two infield fly outs. That?s when infielder Riley Tirotta (Dayton) finished off the eighth with a strikeout.

Y-D refused to lay down and give up in the ninth despite the large deficit. Gavin Dugas (LSU) reached base to lead off the inning after being hit by a pitch, followed by a walk from Erik Tolman (Arizona State). Jack-Thomas Wold crushed a double in the gap and Dugas was able to come around and score on the play. That would be the only run of the game for the Sox, they fell to the Anglers 15-1.

The Red Sox will have a chance to rebound tomorrow and quickly forget about this loss when they host the Wareham Gatemen at 5:00 P.M. at Red Wilson Field.