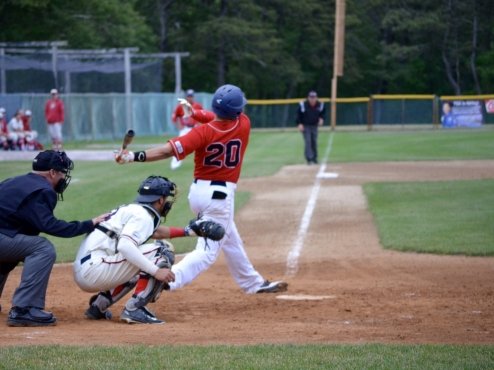 HARWICH, Mass. ? The Y-D Red Sox (0-2) traveled to Harwich for Monday night?s game against the Harwich Mariners (3-0). Mitch Hart (USC) took the hill for Y-D, as the Red Sox looked to get their first win in the young season.

Hart finished up his sophomore season at USC, coming off a freshman year where he was selected as a Freshman All-American and finished the year with a 4.07 ERA. BJ Myers got the start for Harwich, coming off of a solid season at West Virginia in which he recorded a 4.02 ERA in 66.1 innings. Hart (0-1) took the loss in the 9-1 Harwich victory, and Myers (1-0) got the win.

In the first inning, the Mariners quickly loaded the bases with a leadoff single and two walks. This brought Austin Filiere (MIT) to the plate, who hit a breaking ball past shortstop Kevin Smith (Maryland), which scored Ernie Clement (Virginia) for the first run of the game. Harwich added two more runs on a hard single between first and second base by Anthony Critelli (Holy Cross). After another walk, Hart settled down and the Red Sox escaped the inning allowing only three runs.

The Mariners added another run in the second from a home run by Pavin Smith (Virginia) on a pitch that stayed up in the zone. But, Hart looked like he began to settle down in the second and kept the Mariners scoreless until the fifth. Outside of the pitch to Smith, his command looked much better in these innings than it had at the start of the game.

While they didn?t score any runs in the early innings, the Red Sox?s bats started to heat up in the third inning. Mikey Diekroeger (Stanford) started the inning with a line drive into right field, but right fielder Tyler Kirkpatrick (Marist) made a running catch in the gap to record the out. Lukas Burch (Kent State) followed with another lineout to right, and Paul Rufo (Binghamton) notched the Red Sox?s second hit of the game with a line drive up the middle. But, nothing came of the inning, and the Red Sox remained without a run.

In the bottom of the fifth, however, Harwich got to Hart again. After a single and a ground rule double, Filiere crushed a home run over the left field fence. This was the last inning for Hart, who allowed seven runs in five innings.

Matt Winaker (Stanford) came around from first base to score Y-D?s first run of the game in the seventh inning on Corey Dempster?s (USC) double off of the base of the left field wall. Diekroeger followed with a well-hit line drive, but it was speared by Fifiele for the third out of the inning.

Harwich added two more in the bottom of the eight, stringing together a few hits off of Y-D pitcher Sam Delaplane (Eastern Michigan) to make it 9-1 Mariners. The Red Sox put two men on base in the top of the ninth, but again fell short and the game became final.

Overall, it was again a tough night for the Red Sox both at the plate and on the mound. Hart showed flashes of brilliance in the middle of his outing, but instances of inconsistent command caused him to leave pitches over the plate and the Harwich hitters were able to put the ball in play. At the plate, Y-D wasn?t able to carry any momentum over from the late-inning surge against Brewster on Sunday night. The team is now batting .194 through three games.

The Red Sox look to bounce back and tally the first win of the season tomorrow at home against the Chatham Anglers. First pitch is at 5 p.m.