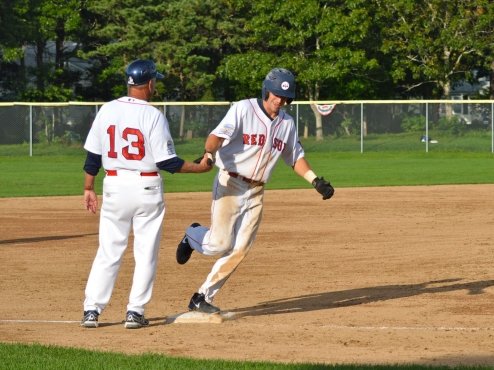 SOUTH YARMOUTH, Mass. ? Solid pitching and solid hitting have been the name of the game for the Yarmouth-Dennis Red Sox. Y-D picked up an impressive win over the Harwich on Monday night, defeating the Mariners 8-4.

For the third straight time Y-D and Harwich have met, the Red Sox came out on top. After losing their season opener to Harwich, Y-D now has the series lead 3-1.? The two teams will play each other two more times before the season is over.

Y-D?s pitching staff continued their dominance on Monday night, allowing just four runs on seven hits. Kevin Duchene (Illinois) held the Mariners to just three hits during his six innings of work. It was a great outing for Duchene as he struck out two and did not allow an earned run.

Parker Bugg (LSU) pitched two solid innings of relief as he struck out three batters and only allowed 2 runs on 3 hits.

The Red Sox bats were certainly alive in the game as they scored in every inning except the seventh. Jordan Tarsovich (VMI) went 4-for-5 in the game, had two RBIs, and scored three runs. Tarsovich homered in the fifth inning and singled in the first, second, and seventh innings.

?When I took batting practice earlier, I was hitting the ball on both sides of the field real well, third basemen Jordan Tarsovich said. ?I was confident and just performed. It was a good day at the plate.?

Andrew Stevenson (LSU) went 2-for-5 in the game and had one RBI. Tim Wharton (Catawba College) went 1-for-3 with two RBIs while Ramsey Romano (Michigan) also brought in two runs and went 3-for-5.