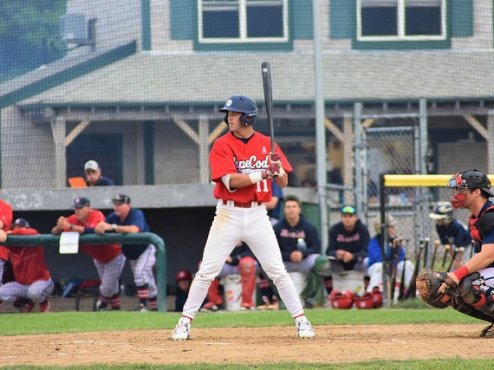 SOUTH YARMOUTH ? Y-D?s three-game winning streak came to an end with the 10-4 loss in game one of Sunday?s doubleheader against the Wareham Gatemen, but they began a new winning streak with a 4-2 win in the nightcap.

It was all Wareham to start the day. The Gatemen couldn?t get to Y-D starter Nathan Wiles (Oklahoma) the first time through the order, going 1-9 with two strikeouts, but put the hurt on him the second time through, when they went 4-7 with a walk, a HBP, a HR (by Lael Lockhart Jr. of Houston), and five runs.

Wiles exited the ballgame in the fifth inning after surrendering his second long ball of the day, this time to Andrew Vaughn (UC Berkeley). He gave way to Mitchell Tyransky (Michigan State), whose sole run allowed was unearned in the fifth inning.

Too Little Too Late

Y-D?s comeback effort came up short in the first half of the twin bill. Andrew Daschbach (Stanford) scored the team?s first run in the fifth inning on a Nick Quintana (Arizona) sacrifice fly with the bases loaded and nobody out. Jonny DeLuca (Oregon) hit his first homer of the year to lead off the bottom of the sixth and the Sox added two more in the inning on an RBI double by Christian Koss (UC Irvine) and an RBI single off the bat of Quin Cotton (Grand Canyon).

The four runs in the fifth and sixth cut the lead from 8-0 to 8-4, but Wareham added two more unearned runs in the top of the seventh to put the game away.

Andrew Vaughn?s estimated 435-foot bomb to dead center to put Wareham up 7-0. Nathan Wiles, the starting pitcher for Y-D, was running on his last legs and Vaughn sent him to the bench with his home run.

It looked as though the Y-D Red Sox would drop both ends of a doubleheader for the second consecutive Sunday. Reese Albert (Florida State) had other plans.

Tommy Henry (Michigan) made his first start of the season for Y-D and dazzled, going four innings, allowing two hits, walking one, surrendering one earned run, and fanning three. The effort from Henry was a vast improvement from his last season with Y-D, where he pitched to a 5.92 ERA over 13.2 innings.

?It was fun,? Henry said about his return to the mound for Y-D. ?Any baseball player is looking to get back on the field. I think [I had] like a month off, so I was itching to get back pitching and I was excited to get in front of a defense that?s this good.?

Sam Kessler (West Virginia) came on in relief of Henry and gave up a leadoff homer to Parker Phillips (Austin Peay) in the fifth before settling in and retiring the next three batters.

Tristan Baker (Western Carolina) relieved Kessler in the middle of the sixth and closed out the inning without trouble.

Then the Y-D bats came alive.

Zach Ashford (Fresno State) led off the bottom of the sixth with an innocuous single and then stole second during Christian Koss? at-bat. Koss grounded out and was unable to advance the runner.

Andrew Daschbach walked to bring up Quin Cotton, who singled to halve the lead from two to one.

Then it was Reese Albert time. On the first pitch of his at-bat, Albert slugged a three-run bomb over the wall in right-center to score Matt Dyer of Arizona (who pinch ran for Daschbach), and Cotton. His dinger made the score 4-2.

?I was trying to hit the ball hard into the gap, just make solid contact and move the runners,? Albert said about his go-ahead homer after the victory. ?It ended up working out pretty well.?

Baker came back out for the top of the seventh and nailed down the victory but not before allowing his first earned run of the season. The final score was 4-3.

Reese Albert?s three-run home run to put Y-D ahead late. With runners on the corners and one out, Albert came up to the dish with a chance to tie the game. He did a little more than that, knocking the first pitch he saw over the fence in right-center to give Y-D a 4-2 lead, their first lead of the day.

The Red Sox (6-5-2) are back in action against Orleans (4-8) on Tuesday night. First pitch from Red Wilson Field is scheduled for 5 p.m.