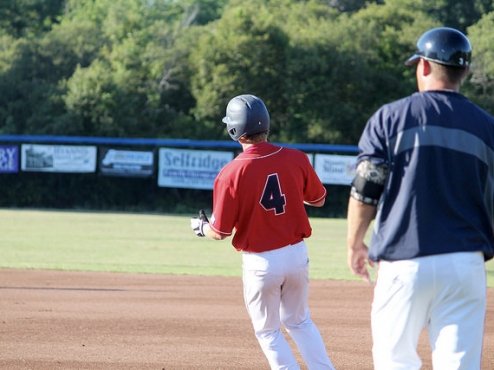 rn By Michael McClearyrnrnThe feeling in the crowd was impatient. ?Fans watched as inning after inning, the Red Sox came up empty. They threatened all game, but it just didn’t seem like luck would be on their side.?rnrnIn the fifth inning of the game, 32 innings into the scoring slump, second baseman Nico Hoerner challenged from third with a 1-0 count on Luke Miller. ?The next pitch was thrown in the dirt and past the catcher. ?Hoerner reacted immediately?and started racing home. ?Ninety feet was as close as the team has come to a run over the past three games. Sixty… thirty… fifteen… zero. In a moment of triumph, Hoerner threw his hands into the air in celebration. It was a simple gesture, but it served powerful?symbol to help Y-D escape the biggest hole it has dug all season.rnrn”There was definitely?a comical aspect to it,” Hoerner said. “We were doing all sorts of things in the dugout to get us going, to score in kind of a quirky way was fitting after all?that.”rnrnThe Red Sox snapped their scoreless streak Wednesday in Hyannis. ?The team had lost three straight and reached many different season?lows prior to the game at McKeon Park. Y-D recorded 12 hits and rode its momentum to a 3-1 victory for their first win since Saturday. Hoerner’s gesture dominated the feeling of the game and helped the Red Sox mentally recover from their struggles.rnrn”It was definitely?an elevated emotion for just one run in the fifth inning,” Hoerner laughed. “It was such a team-thing before, that was my favorite moment of the summer so far.”rnrnHoerner continued that it feels great to be in the win category again. ?The emotions were high amongst Y-D immediately?following the game. ?Hoerner and shortstop Connor Kaiser exchanged jokes and smiles could be seen all across the field on the Red Sox side. ?rnrnAlfonso Rivas, who reached on all four of his at-bats, shared some of the humorous cheer about Hoerner’s fifth inning celebration.rnrn”We had runners in scoring position almost?every inning. It’s?sort?of?funny, it?just wasn’t happening,” Rivas said. “We were joking around, ‘It finally happened!’”rnrnJosh McMinn starred in the game which gave Y-D the opportunity to break out of the slump. He went 5.1 innings, allowing only three baserunners and shutting the Hyannis offense down.rnrnStarting the game out with Assistant Coach Scott Gillum manning first base, the Red Sox tried everything to beat the streak. ?He was substituted for Co-Assistant Coach Robert Mercado in an attempt to break the curse. The whole game for Y-D became an experimental performance, as the team tried to figure out what was causing the offense to struggle?so much.rnrnFollowing Y-Ds toughest stretch of the season, this game was a necessary morale booster. ?A sort-of comic relief for a team that was playing with a ton of, as Hoerner described it, “Tension”.rnrnManager Scott Pickler kept it simple with his assessment of the game.?rnrn”It was outstanding, we got twelve hits,” said Pickler. “This will make my off day easier, life’s?good.”rnrnWhile keeping it short, it was clear to see that Pickler was relieved after the win. Hoerner mentioned that was easy to stay relaxed with the way Picker carried himself over the losing stretch. ?He said Pickler projected himself with confidence in the team and that helped them stay away from panicking.rnrnThere hadn’t been much for the Red Sox to cheer about over the past few days. ?The players were hoping to have a reason to smile soon enough, even if it’s for the littlest of reasons.rnrn”Being up 3-1, with how great our pitching’s been, it felt good,” Hoerner said. “Three runs isn’t great looking on paper, but after no runs in three games, it felt like a blowout.”rnrn?rnrn?rnrn?rn