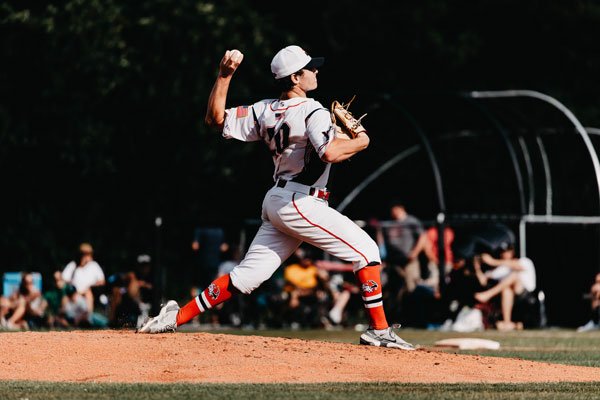 With the East Division crown on the line, neither the Yarmouth-Dennis Red Sox nor the Brewster Whitecaps could deliver a finishing blow. The two teams battled to a 2-2 tie at Red Wilson Field Tuesday night, setting up one final chance for Y-D to win the division Wednesday night. The tie snapped Y-D’s six-game losing streak.

The Red Sox head to Chatham Wednesday night, where they can take the top playoff seed in the East with a win or a tie. A loss would give Brewster the division title based on their record against East Division opponents.

The Red Sox got on the board first with an RBI double from Braden Montgomery in the bottom of the first. After Woody Hadeen was hit by a pitch to lead off the game, he advanced all the way to third on a wild pitch. Montgomery hit a 92-mph chopper back to the mound, where it deflected off the glove of Brewster opener Colton Sundloff and bounced into shallow right field. Hadeen scored easily, and Montgomery raced up to second.

For a team that has struggled recently to score early, it gave the Red Sox an early cushion and showed some signs of offensive life — particularly necessary when Y-D had lost six games on the bounce coming in.

Stanford’s Drew Dowd started for Y-D on the mound, and he was brilliant in the early going. Dowd struck out seven through the first four innings, showing great control of his looping curveball and executing his changeup with command.

Dowd stretched into the fifth inning, longer than he’s gone in any start this year for the Red Sox. While he got two quick outs, he surrendered a two-run double to the red-hot Nick Lorusso to hand Brewster a 2-1 lead.

Still, Dowd’s final line was impressive: 4.2 innings, eight strikeouts, and just the two runs against him. While Dowd had only gone for 45 pitches previously for Y-D, he stretched out to give the Red Sox a fighting chance in a huge game.

“He was really good,” Pickler said of his starter. “That’s a big plus when we go into the playoffs. He’ll be ready when we need him to take the ball.”

The Red Sox did not trail for long, as Cole Carrigg tied the game in the bottom of the sixth. Fernando Gonzalez led off the inning with a double, and moved up to third on a sacrifice bunt by Hadeen. With the infield playing in, Carrigg lined a single between short and third to score Gonzalez and level the game at two.

With the game tied, the Red Sox bullpen carried them home. Aaron Calhoun, Luke Jewett, and Braden Montgomery combined to throw 4.1 no-hit innings in relief. Calhoun struck out three, Jewett four, and Montgomery two to close out the game.

Pickler lauded his pitchers’ exploits as “outstanding” in a game the Red Sox needed to not lose. The Red Sox staff combined for 17 strikeouts on the night.

The Red Sox had a chance to win the division in the bottom of the ninth when Hayden Schott singled with two outs. But a fly out to right ended the threat, and the game.

“It was a good set-up before we go to the playoffs,” Pickler said. “We’ll see what happens.”

Y-D has one final chance to win the East Division Wednesday night at Chatham, in a make-up of Monday’s rain out. A win or a tie is enough for Y-D to earn the top seed in the East playoffs. First pitch from Veterans Field is set for 7 p.m.