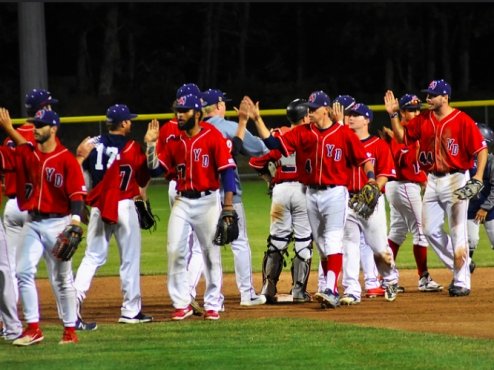 ORLEANS ? The Yarmouth-Dennis Red Sox wrapped up home-field advantage throughout the playoffs with a 2-0 victory over the Orleans Firebirds at Eldredge Park Tuesday evening.

Tommy Henry (Michigan) made his fifth start of the season for the Red Sox, tossing two innings and allowing no hits before departing early. Coach Pickler, who returned to the bench after his trip to Cooperstown for the Hall of Fame ceremonies, turned to newcomer Gordon Ingebritson (Pasadena CC) who rewarded him with three shutout innings of his own.

The Red Sox grabbed an early lead Tuesday and never looked back. Jonny DeLuca (Oregon) got things started in the second inning with a triple to right-center field. He came home two batters later, when Reese Albert (Florida State) singled to center.

The only other run of the game came on an Adam Kerner (San Diego) single that brought home Nick Quintana (Arizona) in the sixth.

Brant Hurter (Georgia Tech) appeared in a game out of the bullpen for the first time this season and threw two scoreless innings without allowing a base runner. Braidyn Fink (Oklahoma) walked one but didn?t allow a hit and struck out two in his only inning of work.

Ryne Nelson (Oregon) picked up his sixth save of the season with a scoreless ninth.

Noah Campbell (South Carolina) went 0-3 Tuesday, lowering his season batting average to .394. In order to qualify for the league batting title, a player must have 2.7 plate appearances per team game. In other words, a player needs 119 plate appearances to qualify, and Campbell is three shy with two games to play.

If Campbell gets a hit in his next at-bat, it?ll increase his batting average to an even .400 for the season. If he ends the season with a batting average over .400 and qualifies for the league leaderboard, he?ll be the first player to hit over .400 since Andrew Calica did it in 2015.