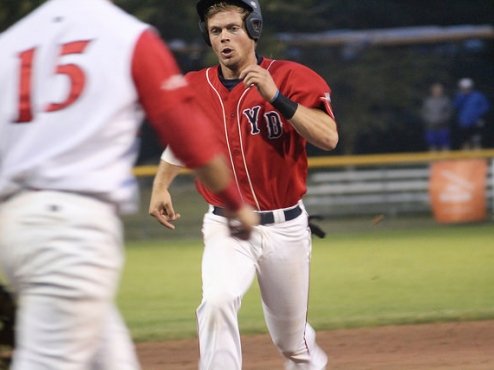 Standing at six feet, three inches catcher Kole Cottam walked up to the plate offering Y-D the opportunity to score by way of his immense power. ?But, with a man on third, he squared up to do something he?s done just twice successfully in the past five years: bunt.

“Coach told me that if I get one strike on me I should look to drop one down,? Cottam said. ??I haven?t done it a whole lot in my career, but he had confidence in me to get it down. I?m glad he did.?

The Red Sox scored in unconventional ways on Monday with their two runs coming by way of a sac fly and a bunt RBI. ?In a game where Y-D had their fewest hit count of the season, the contest offered the opportunity for players on Y-D to showcase the intangibles they may bring to a major league baseball team in the future.

“The best teams win when they are not getting hits,? Cottam said. ?We?ll sac-fly, we?ll squeeze. ?We?re fortunate enough to have great coaches and a great offense.?

Y-D?s offensive success starting out has expanded far beyond their ability to hit the ball and has gone a long way towards building their 3-1 record.

Second baseman Nico Hoerner made the most of his Monday night as well. ?In a game where he went 1-4 with an infield single, he provided one of the most important plays of the game after chopping a slow one to shortstop.

As he does whenever he makes contact, he hustled hard down the first base line and ended up beating out the throw to first. ?This would be vital for the Red Sox as he would be the runner batted home on Cottam?s seventh inning bunt.

“That definitely goes back to Stanford, control what you can,? said Hoerner. ?Luckily I was able to help us out and we won the game.?

Aware of the clich?, Hoerner acknowledged that he didn?t have the game he was hoping to have at the plate, but added that he was happy to score the winning run in that situation. ?Though the scoring doesn?t tell the story, the Red Sox had a very successful day offensively for what was given to them.

Hoerner?s mentality to make the most of what you can proved to be beneficial to the Red Sox team that only needed a few runs to squeak past Orleans. ?In what turned out to be equally as important, the Y-D defense buckled down all game only allowing a single earned to the Firebirds.

“Most kids think that summer ball is about coming down and showcasing your power. ?That?s not always the case,? said Hoerner. ?Coach (Scott Pickler) does a great job of keeping things realistic and helping us win these types of games.?

Had it not been for the strong hitting to start, the Y-D mentality could have proved to be the only thing the team needs to make that added push towards the end of the season. Players believe that the team atmosphere that Y-D creates makes it easier to play through when the going gets tough on offense.

While there is much learning to be had from a game like this, members of the Y-D team were able to share some laughs as they celebrated the win.

“Coach was giving (Cottam) a lot of credit after the game because he asked (Cottam) how many times he?s done that in his career and he said none,? Hoerner said laughing. ?It just shows we got guys here that are willing to do stuff for the team and make stuff happen.?