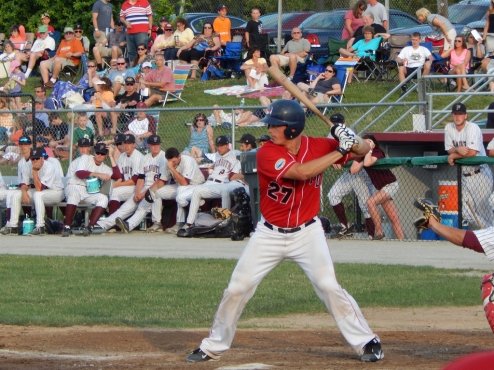 The Yarmouth-Dennis Red Sox traveled to Arnie Allen Diamond on Thursday night to take on the Falmouth Commodores. The Red Sox used a five run sixth inning and a strong start by pitcher Cody Poteet (UCLA) to defeat the Commodores 6-3 for their third win of the season.

The second of four meetings between the two teams began as a pitching duel in the early innings. Commodores starting pitcher Charles Mulholland (South Florida) allowed only two hits and no runs through five innings, but ran into trouble in the sixth. Centerfielder Andrew Stevenson (LSU) led off the sixth with a single and was followed by second baseman Donnie Walton (Oklahoma State) who grounded into a fielders choice. A single by Jordan Tarsovich (VMI) and a walk by Rob Fonseca (Northeastern) loaded the bases for the Red Sox. Falmouth manager Jeff Trundy turned to relief pitcher Chandler Eden (Oregon State), hoping to get out of the inning unscathed. Eden struggled however, walking in a run and then allowing a three run double to catcher Jason Goldstein (Illinois). A single by Red Sox newcomer Hunter Cole (Georgia) scored Goldstein to cap off a five run sixth inning. The Red Sox would tack on one more run in the seventh after a wild pitch from Commodores pitcher Spencer Herrmann (Fisher College) scored Stevenson.

Cody Poteet (UCLA) made his season debut for the Red Sox on the mound. The hard-throwing right-hander pitched four and two-thirds innings, allowed only one run on five hits, and struck out six. The only run came off of a home run from leftfielder Conor Costello (Oklahoma State) in the fourth inning. The Red Sox starting pitchers continue to be susceptible to the long ball, as it was the sixth home run surrendered in the last three games.

The Commodores did make the game interesting in the eighth inning. Relief pitcher Henry Van Zant (Bowdoin College) allowed a leadoff single to pinch-hitter Jake Madsen (Ohio University) and a double to Costello to put two runners in scoring position for the Commodores. A two-out double by Connor Marabell (Jacksonville) scored two runs to close the Red Sox lead to 6-3. Manager Scott Pickler brought in pitcher Dimitri Kourtis (Mercer) to get the Red Sox out of the jam. A scoreless ninth inning by Kourtis secured the victory for the Red Sox.

The Red Sox (3-5) hope to continue their winning ways on Friday, June 20th when they travel to Stony Brook Field to take on the Brewster Whitecaps (4-4). First pitch is set for 5:00pm.?