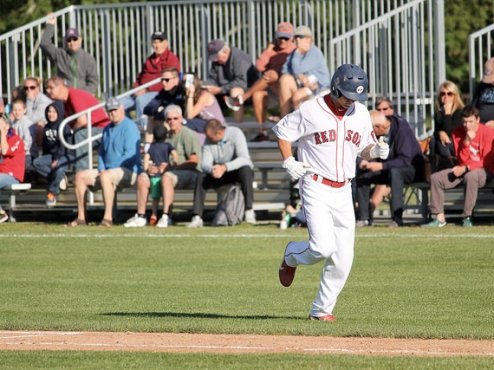 Things were looking good for the Red Sox. ?With two men on and no outs, it looked like its offense was about to get a boost. ?What happened instead was very different.

The next pitch offered a groundout that was turned for a double play and Jonah Davis, still with a man on third, finished out the inning with a strikeout. ?He threw his bat to the side looking visibly frustrated. ?His frustration was with something the team had grown used to as the game went along.

Y-D out-paced Harwich in the hits category going for 12 to the Mariners ten, yet it still fell short in its 5-2 loss at ?Red? Wilson Field. ?The Red Sox struggled to capitalize in situations with runners on base and in scoring position, which resulted in multiple players being stranded on the base path.

Following a horrid fifth inning in the field, in which the Red Sox allowed four runs, the team showed many signs of offensive promise but ultimately could not finish some plays. On a few different occasions, the Red Sox stranded more than one baserunner on the basepaths. ?While its two runs both came on RBI singles, Y-D could not string together enough of those plays to surmount the lead the Mariners put on them.

Carlos Cortes led the way for the Red Sox with three hits and believes that the turnout of Saturday?s game shouldn?t be a cause for concern, adding that the team has shown they can hit over the past few games which will lead to a lot of production in the future.

Manager Scott Pickler doubled down on Cortes? belief saying there is no real reason for their struggles to score runs and it all just comes down to ?timely hitting.?

Davis brought up timely hits as a reason for the outcome of Saturday?s game as well. ?He mentioned that the outlook is positive for the team and that it has hitters throughout the lineup. ?He also expressed excitement over some of the new ?position players? that will be making their way into the Y-D lineup later this summer.

With all the optimism amongst the members of the Red Sox franchise, Saturday?s loss was still one they felt they could?ve been in a better position for. Players and coaches, alike, didn?t have much explanation for what went wrong in Y-D?s first loss of the season.

Cortes was just one player who was left on base more than once for the Sox. ?He doesn?t think the team needs to change anything, in particular. ?But, a few different hit placements could go a long way.