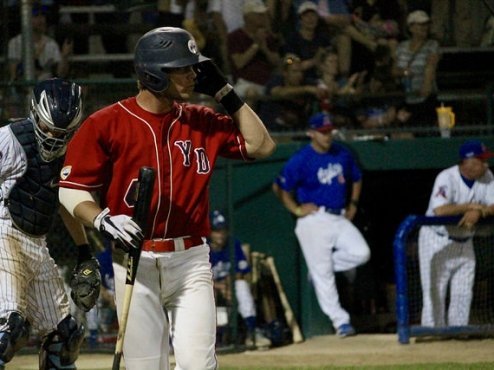 rn By Michael McClearyrnrnAnxious fans cheered as Nick Quintana came down to his last strike. With a man on, the Red Sox were finally threatening with their opportunities running low.rnrn”Come on Nick,” yelled a fan watching adjacent to the Y-D dugout as Chatham pitcher Jack Degroat reached back in his delivery.rnrnThe pitch sailed past the swinging Quintana and he buried his head as he walked toward the dugout. ?On-deck hitter Drew Mendoza stretched his bat behind him and leaned back in subtle disappointment. He has only been in a Y-D uniform for a few days, but he has already seen the team reach its low.rnrn”Big crowd, tight situation. There’s nothing I could really do,” Quintana said. “I was just looking for a pitch to hit and I missed a few. ?It happens.”rnrnThe Red Sox, who are used to explosive performances, bottomed out on Monday, getting shut out the second game in a row and losing two straight for the first time all season. For a Y-D team that has scored over ten runs on multiple occasions, four scores have been enough to defeat it over the past couple of games.rnrn”We put balls in play, we left runners on base. We’re just kind of hitting a low right now,” Quintana said. “Every season you play there is going to be ups and downs. I wouldn’t call it a slump.”rnrnThe Red Sox still managed five hits in the ball game. ?That is half of Chatham’s ten in what turned out to be a lopsided performance.?Y-D has made a habit of threatening in a tight situation. Shutting Y-D out has been no easy task, as it still managed five base runners on a day that could be seen as its worst offensive performance.rnrnOutfielder Alex McKenna, who had his hitting streak increase to eight in the fourth on a slow roller past Chatham pitcher Austin Bergner, doesn’t feel like the past two performances should define the Red Sox as a team.rnrn”It has been kind of tough, we’re just not getting guys on base when we need them,” McKenna said. “When we get things rolling, we’re pretty good. Sometimes, what you want to do is not going to go your way.”rnrnHe added that there is never a good time to panic in baseball and that it should be easy to move on from the set of scoreless performances the team has had over the past few days.rnrnManager Scott Pickler shares similar views on the subject.rnrn”Yeah, I’m not worried,” Pickler said with a reassuring nod. “I’m not worried at all, no.”rnrnMcKenna, who has been Y-D’s hottest hitter over the past few contests and saw his batting average rise to .371 on Monday, believes that he hasn’t been taking the best swings, either. ?He insists that he has been getting a few lucky breaks.rnrnHe hopes that his fortunes soon translate?onto his teammates.rnrn”Offense is contagious,” McKenna said. “We just have to get that winning feeling again.”rnrn?rn