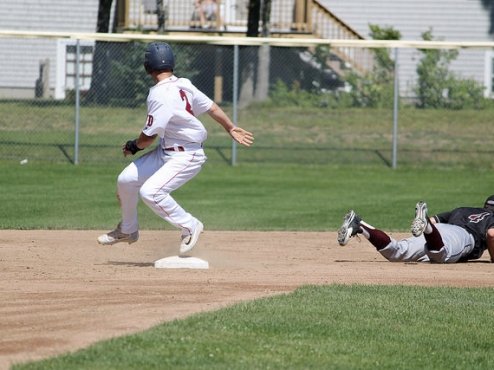 Jonah Davis Readied in the box as Falmouth pitcher William Ethridge went through his wind-up. ?Before Sunday, Davis, a talented player, possessed stats that were anything but imposing. Despite this, Ethridge sailed the first pitch way over the head and out of reach of the catcher. With no time to settle down, Ethridge watched the ball slip away for a second time. This time it flew far to the right of the right-hander batters box. Davis took the walk after two more consecutive pitches out of the zone.

The situation, while obscure, was a bit of a normalcy in the fourth inning for the Red Sox.

“It wasn?t just by a little bit, it was by a lot,? Davis said smiling. ?He obviously didn?t have much control, I was a little frazzled.?

The Red Sox (7-3-1) exploded in the fourth inning in its 14-3 game one win at ?Red? Wilson Field. ?The half-inning consisted of a misjudged pop-fly, pitches way out of the zone, and overthrows of the first baseman to the tune of three errors by the Commodores and seven runs in the inning for Y-D.

“If you put the ball in play, you have a good chance of getting on base,? Hoerner said, still disappointed following the 2-1 loss in game two of the doubleheader. ?Speed?s a big part of our team, we put pressure on them in all aspects.?

In the Third inning of the game, Carlos Cortes popped up what seemed to be a routine fly ball to second baseman Clayton Daniel. While it was caught, Daniel appeared to have lost in the sun as he twisted back awkwardly and fell to the ground after making the play. The first baserunner of the fourth inning was put on by a similar play to left field. ?Alfonso Rivas skied one high into left and the left fielder Cameron O?Neil got under it, but then appeared to have lost the ball in the sun as it dropped just behind his outstretched glove. This would provide a bit of foreshadowing for how the rest of the inning would progress.

Falmouth struggled to make plays all game long. ?The first run the Red Sox scored was off of a bobbled ball by Falmouth shortstop Logan Davidson. ?While Y-D was making consistent contact with the ball, in a game where 14 runs were scored by the Red Sox, Falmouth pitchers only walked away with seven earned.

“We took advantage of their mistakes, we put a lot of runners on,? Manager Scott Pickler said. ?When they made a mistake, we did a good job of putting the ball in play and scoring runs.?

The errors weren?t the only spotlight of the game. ?Pitcher Kris Bubic pitched five strong innings, only allowing four hits and striking out a Red Sox season high nine batters. The lone run he surrendered came with two outs in the last inning of his outing.

In the fourth inning, six of the seven runs that Y-D scored were unearned runs to the opposing pitchers. ?Most of Y-D?s runs came off of overthrows and poor plays that allowed them to get on. ?Kole Cottam?s run was the only one to score that inning who didn?t reach on an error, and he was hit by a pitch.

“Once that first error happened, the ball started bouncing all over the place,? Davis said. ?It?s baseball: hitting?s contagious and errors are contagious. We just have to capitalize on the extra at-bats.?