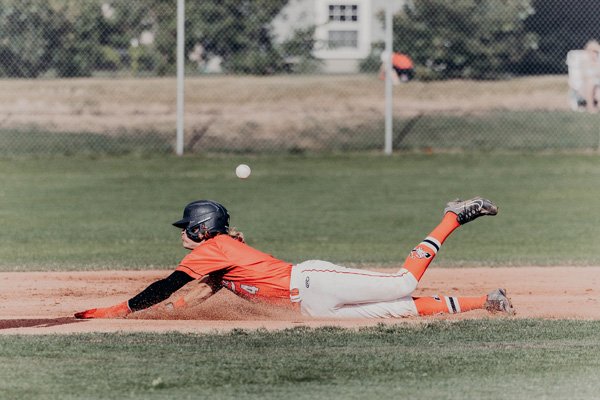 The Yarmouth-Dennis Red Sox battled back from 2-0 and 4-3 deficits to take a 6-4 lead into the sixth inning, and although they allowed the Harwich Mariners to tie the game in the sixth, they held on to secure a 6-6 tie with the Mariners Friday night at Red Wilson Field. The game was called after seven innings due to darkness.

“I thought it was a great ballgame,” Y-D Field Manager Scott Pickler said. “We made some mistakes, they hit them, and then we battled back.”

Harwich tagged Y-D starter Grant Taylor for two early runs on a Joe Vetrano home run. Taylor struck out the first two Mariners he faced, but surrendered a two-out single to Brock Wilken followed by the blast from Vetrano.

But the Sox tied the game in the bottom of the first. After a leadoff walk from Homer Bush Jr., Jonny Long doubled him home with two outs before Cole Carrigg dropped a bloop single into center to score Long from second.

The Red Sox took a 3-2 lead in the bottom of the fourth after Cole Carrigg scored on an error, but they surrendered the lead back in the top of the fifth. Zach Veen got two outs quickly, but gave up back-to-back home runs to Chris Newell and Brock Wilken. Wilken’s blast traveled a monstrous 414 feet to left center.

But the back-and-forth affair continued into the bottom of the fifth. Y-D loaded the bases with a walk and two singles before scoring three runs via a walk, an error, and a fielder’s choice. Once again, Y-D found ways to get runs home without extra-base hits. They managed just two in the game (Long’s double and a later double from Carrigg), but still put six runs on the board.

“When they don’t try to do too much, I think we’re fine,” Pickler said. “That’s the whole thing, we’ve got a lot of guys trying to do too much.”

The Mariners tied the game in the top half yet again — after Harwich loaded the bases against Sam Klein, Pickler brought Luke Jewett in with one out. Jewett allowed the Mariners to score two with a single and a walk, but limited the damage to that.

With the game wearing on and the sun setting, the managers conferred with the umpires and let the game continue for one more inning. Jewett sent the Mariners down in order in the top of the seventh, while the Red Sox got runners up to second and third with two outs. But Harwich pitcher Zane Probst got Caden Connor to fly out to left to end the game.

The Red Sox will travel to Wareham for the first time this summer Saturday at 6 p.m., before hosting Chatham at Red Wilson Field on Sunday at 5.