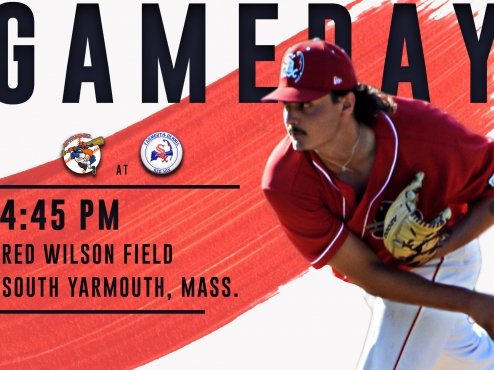 SOUTH YARMOUTH ? For the second day in a row, the Red Sox fell to the Hyannis Harbor Hawks. They lost 9-3 and are now officially the three seed in the playoffs beginning on Friday night.

Mark DiLuia (Maryland) was on the mound for the Sox and got off to a rough start. Two batters into the game, with one out and one on, Hunter Goodman (Memphis) crushed a two-run home run to dead centerfield. Brandon Dufault (Northeastern) entered the game and got Y-D out of the inning while only down 2-0.

Two more runs crossed the plate in the second and all of a sudden the Harbor Hawks held a healthy 4-0 lead. The Red Sox woke up in the home half of the inning, as Tate Samuelson (Cal Poly) reached base with a leadoff single. Andrew Eyster (South Carolina) and Jack-Thomas Wold both got on to load the bases for Noah Cardenas (UCLA). He walked, earning an RBI as Samuelson crossed the plate. R.J. Yeager grounded into a double play, but a run scored and cut the Hyannis lead in half. Wold scored the final run of the inning on a wild pitch, making the score 4-3.

Jared DeSantolo (FAU) quickly stopped Y-D?s momentum with a home run on the first pitch he saw in the third inning. The Harbor Hawks took their 5-3 lead into the fifth, when they opened this game up. After a walk had loaded the bases, Trevor Hauver (Arizona State) had a 3-1 count and the Red Sox were on the verge of walking in a run. Instead, Hauver blasted a grand slam over the fence in right-centerfield.

No more runs were scored by either team for the remainder of the game ? in fact, the Red Sox only got a runner in scoring position once in the final five innings. The 9-3 loss made it impossible for Y-D to surpass Orleans or Chatham in the standings.

The Firebirds and Anglers were having a head to head matchup of their own in Chatham while this game was taking place, and the Anglers came out victorious. This means that it locks up the one seed for them, while the Firebirds will be the two.