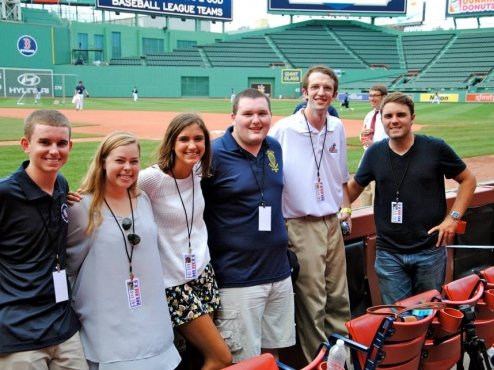 A selection of Y-D interns were invited to the 2013 Cape Cod Baseball League Workouts at Fenway Park. Photo courtesy of Isobelle Hemmers.

Despite the new season being months away, the Yarmouth-Dennis Red Sox are accepting intern applications for the summer of 2014.

Interns are responsible for the execution of various activities involving the Y-D organization, including operations, marketing, and fan experience.

In addition to Y-D?s search for game-day interns outlined above, the organization is also looking for play-by-play and color broadcasters (1 each), as well as a writer and video assistant. Broadcasters manage the online streaming of Y-D games, including a pre-game and post-game show, all of which involve collaboration with the video assistant. Writing interns prepare game recaps and other press releases pertinent to events in the organization.

Past interns with Y-D and the Cape Cod Baseball League have gone on to serve various roles with IMG College, the New England Patriots, ESPN, the Arizona Diamondbacks, and the athletic departments of Vanderbilt University and the University of Massachusetts, among others.

Individuals interested in the above mentioned positions should submit a resume and letter of interest to Y-D President Joe Rubin at jmr2004@verizon.net.