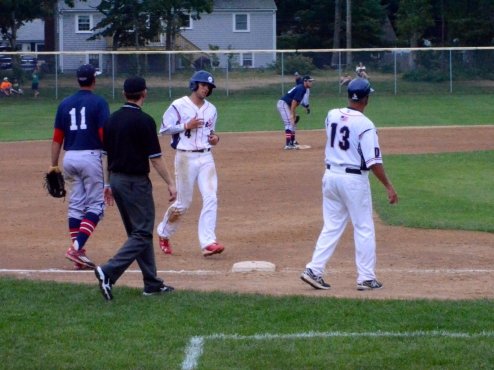 SOUTH YARMOUTH, Mass.? ? The Yarmouth-Dennis Red Sox (19-12) dropped Sunday night?s contest against the Harwich Mariners (19-10-2), 11-4, in a game shortened to eight innings due to darkness. The Red Sox were unable to recover from a seven-run first inning by the Mariners but did tally 11 hits in the defeat. Kevin Smith (Maryland) and Dillon Persinger (California State Fullerton) powered the Red Sox offense, both recording two hits and driving in one run each.

Jared Janczak (Texas Christian, 0-1) got the start for the Red Sox and was tagged for seven runs in three innings of work. He looked like he struggled with his command at the start of his outing, but had a few chances to get out of the first inning quickly that his defense couldn?t convert.

On the hill for the Mariners was Shane McCarthy (Seton Hall), one of Harwich?s nine players selected for the All-Star Game. Entering tonight?s game, McCarthy had posted a 1.50 ERA over 30 innings of work for the Mariners. The Red Sox were able to get to him for eight hits and four runs over 4.1 innings, however, but Teddy Rodliff (Stony Brook) threw 3.2 innings of scoreless relief to stifle any comeback chance.

Y-D got on the board in the third inning, cutting the deficit to 7-1. Will Toffey (Vanderbilt) reached on an error by the shortstop with two outs in the inning, and Brendan Skidmore (Binghamton) poked a fly ball down the right field line for a double, scoring Toffey. Skidmore now has 18 RBI this season, which leads the team and is fourth most in the league.

Austin Filiere (Massachusetts Institute of Technology) hit a three-run home run in the top of the fifth inning, extending the lead to 10-1. But, the Red Sox responded in the next half-inning, as JJ Muno (California Santa Barbara) and Skidmore reached to start the inning with a single and a hit batsman, respectively.

Smith then smashed a double, scoring Muno and cutting the deficit to 10-2. Persinger singled to drive in Skidmore, and Deon Stafford Jr. (Saint Joseph?s) grounded into a fielder?s choice to bring home Smith, making the score 10-4.

The Mariners grabbed another run on a home run by Joe Dunand (North Carolina State) in the top of the sixth. The Red Sox offense looked like it was getting started again in the bottom half of the sixth, but a double play extinguished the rally and the score held until the game was called.

Janczak took the loss, his first decision of the season, while McCarthy earned the win and moved to 2-1. With the loss, the Red Sox fall to second place in the East Division but still have a seven-point lead on the Orleans Firebirds.

Y-D will be back in action on Tuesday night, taking on the Firebirds at Red Wilson Field, with first pitch at 5 p.m. rn