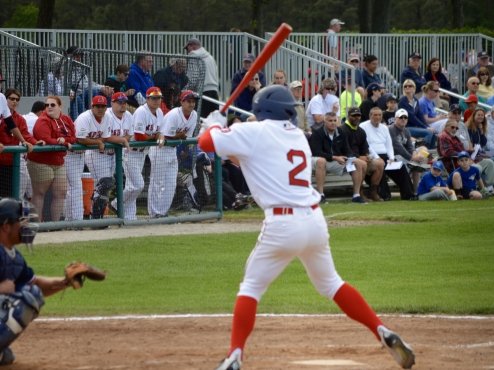 SOUTH YARMOUTH, Mass. ? The Yarmouth-Dennis Red Sox kicked off the 2016 season at home Friday with a loss to the Wareham Gatemen. Will Gaddis took the hill for the Red Sox, coming off his sophomore season for the Furman Paladins in which he posted a 3.45 ERA and 92 strikeouts while logging 101.2 innings. Jake Fishman, a rising senior at Union College, got the start for Wareham. Gaddis (0-1) took the loss in the Gatemen?s 6-3 victory, while Fishman (1-0) earned the win.

The Gatemen got ahead early, starting the game with a single by Joey Bartosic (George Washington) and a four-pitch walk by Trever Ezell (Southeast Missouri State). After a sacrifice bunt moved the runners over, a groundball by Colton Shaver (BYU) pushed the first run across for the Gatemen.

The Red Sox responded in the second inning, however, after a leadoff double by Deon Stafford, Jr. (Saint Joseph?s). This is par for the course for Stafford, who hit .395 last season at Saint Joseph?s and was named a Louisville Slugger Third Team All-American. ?A balk by Fishman pushed Stafford to third, and a sacrifice fly by Dylan Rosa (Kent State) drove in the first run of the season for Y-D, tying the score at one.

But, Wareham pushed back in the third inning. Bartosic singled and stole second, moved to third on a wild pitch, and later scored on a single by Shaver. Shaver hit a solo home run to lead off the sixth, which chased Gaddis from the game. Sam Sinnen (Old Dominion) came in for Y-D in relief, but allowed a quick single and a two-run home run to Brett Netzer (Charlotte) to extend the Wareham lead to 6-1.

The Red Sox weren?t going out quietly though, as a single by Kevin Smith (Maryland) brought up pinch hitter Matt Winaker (Stanford) who promptly smashed a homerun over the right field fence to make the score 6-3.

That score held for the rest of the game. While an opening day loss is disappointing, there were positives to taken from the game as well.

Although the final line for Gaddis wasn?t excellent, he located well with his off-speed pitches after the first inning. He drew many swinging strikes with his curveball and it served to be a solid out pitch throughout the game.

Dylan Woods (Nova Southeastern) and Matthew Whatley (Oral Roberts) had a few hard hit line drives that were hit right at the Wareham fielders, and seemed to fall victim to bad luck.

The Red Sox look to bounce back tomorrow evening against the Falmouth Commodores at home. The game will start at 5 p.m.