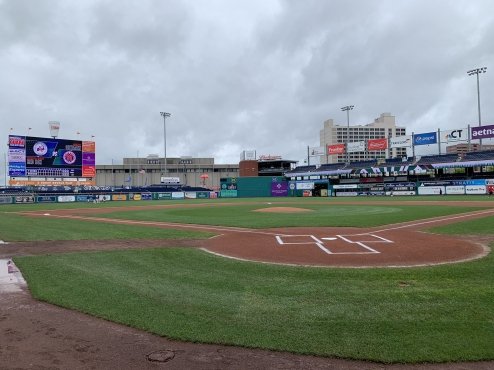 SOUTH YARMOUTH ? The Red Sox traveled to Hartford on Tuesday to take on the Wareham Gatemen at Dunkin? Donuts Park. It sure was a dog fight, but the Gatemen came away victorious in the end, 3-2.

John Beller (USC) was on the mound for Y-D in his fifth start of the summer. With two outs in the first inning, Adrian Del Castillo (Miami) got the best of him with an RBI single to center field. The Gatemen struck first with the 1-0 lead, but Beller was then able to lock in. He gave up back to back base hits in the second before getting three straight outs. He pitched a perfect 1-2-3 third, after the Red Sox had gotten on the board in the top of the inning.

Wyatt Young (Pepperdine) reached base with a two-out single, and then stole second in the next at bat. That allowed him to cross the plate on a Brad Beesley (Cal Poly) hit up the middle.

Beller received a lot of help from his defense in the fourth, starting with a diving catch in right field from Andrew Eyster (South Carolina). With a runner on second and two outs, Young made a diving stop at shortstop to save a run and get the final out of the inning.

Young came up big once again in the fifth, swinging at the first pitch he saw with two outs and driving it over the wall in right field. It was his first home run of the summer, and it gave the Red Sox a 2-1 lead.

Carlos Lomeli (St. Mary?s) entered the game in the home half of the fifth and threw a clean inning. It wasn?t until the sixth when Chad Stevens (Portland) drove in the game winning run on a two-run single off of Lomeli. The 3-2 lead would hold through the rest of the game.

Taylor Dollard (Cal Poly) took over and pitched the remainder of the night, only allowing two hits and striking out three batters over 2.2 innings.

With two outs in the ninth, Austin Wells (Arizona) had one final at bat to try to extend the game for the Red Sox. On the third pitch, he crushed a ball to deep right field, but a leaping catch was made at the wall. With the win, Wareham clinched a spot in the playoffs and is now tied with Falmouth for first place in the Western Division.

Y-D is still tied for first in the East with Chatham, but will play them on back to back days on Wednesday and Thursday. Pitching has been better as of late for the Red Sox, but the problem now is that they need to stay healthy. Both Eyster and Noah Campbell (South Carolina) left Tuesday?s game with injuries.

The Red Sox will host the Anglers at 5:00 P.M. at Red Wilson Field on Wednesday.