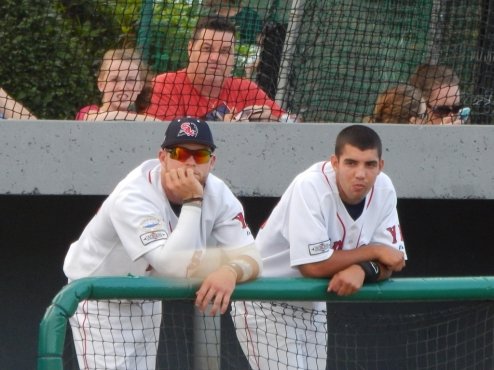 The Yarmouth-Dennis Red Sox traveled to Veterans Field Sunday night to take on the Chatham Anglers.

Kyle Wood (L, 1-3) started on the mound for the Sox. He would pitch just 1.1 innings after letting up six hits, walking one batter and allowing five runs to score.

Andrew Chin (2-0) started for the Anglers. Chin pitched two innings after letting up five hits and allowing five runs to score. He recorded one walk and one strike out in the outing.

Y-D bats were lively compared to Saturday?s game when just three hits were recorded. Sunday, they put up eight hits in 35 at-bats. Taylor Gushue went two for four at the plate, scoring once and batting in a run in the game. Auston Bousfield and Cole Peragine both went one for three with one RBI and scoring once. Strikeouts were a problem for the Sox who ended the game with nine. Y-D has the least amount of strikeouts in the league, showing uncharacteristic play.

Jordan Minch (0-2) pitched six innings in relief for the Sox, allowing three runs early on in his appearance. He lasted until the eighth, when Sam Coonrod (1-0) entered and pitched .2 of an inning. He walked one and struck out two batters, showing his strength from the bullpen.

For Chatham, Dominic Moreno (W, 2-0) pitched three innings, allowing just one hit and struck out four batters. Moreno?s two wins come from the Red Sox and three of his five appearances are against the Sox. Kyle Funkhouser picked up his third save of the season for Chatham after he pitched two innings.

The Red Sox return home Monday to take on the Orleans Firebirds at 5 p.m. EST. The Firebirds (11-15-0) are three points behind the Sox in Eastern Division standings. Be sure to check our Facebook and Twitter pages for live updates. Our live broadcast returns as well, as Chris, Cody and Ryan have the call with the pregame show starting shortly before first pitch.