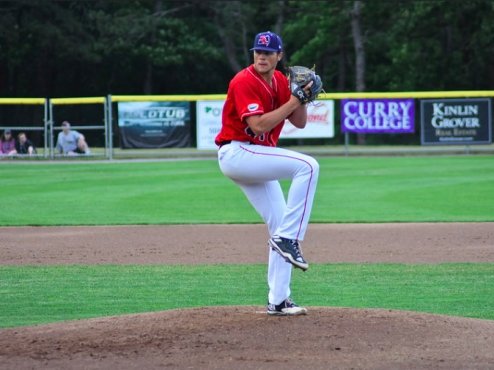 BREWSTER ? ?Two points were earned Wednesday evening in what was the third and final meeting at Stony Brook Field this season between the Yarmouth-Dennis Red Sox and the Brewster Whitecaps.

Unfortunately, though, those points were earned by Brewster, as the Whitecaps came up victorious against Y-D for the first time this summer.

Brant Hurter (Georgia Tech) made his fifth start of the season for the Red Sox but ran into immediate trouble.

Ray Alejo (Central Florida) was the catalyst for the Whitecaps offense early, reaching on a single and advancing to second on an error charged to David Hamilton (Texas), one of five Y-D errors for the game. With Jesse Franklin (Michigan) up at the dish, Alejo danced out at second and got a great jump, stealing third base. Christian Koss was unable to corral Patrick Bailey?s (North Carolina State) throw, allowing Alejo to cross home and put the Whitecaps ahead.

Hurter worked a clean second inning and looked as if he had settled down after securing the first two outs of the third, but a single off the bat of Franklin kept the inning alive. Conor Grammes (Xavier) added a single of his own, and Hurter walked Hunter Bishop (Arizona State) to load the bases.

Hurter was a single strike away from ending the inning, but Cameron Eden (California Berkeley) hung tough and fouled off four balls before launching a bases-clearing double to left field.

The Red Sox defensive miscues cost them another run, as Hamilton?s second error of the game allowed Eden to score the fourth run of the inning.

Reid Detmers (Louisville) turned in a magnificent start for Brewster, stymieing the dynamic Red Sox offense for 5.2 innings. He allowed four hits and two walks but struck out five Y-D batters, who never threatened the southpaw.

Shutdown performances from Tyler Madrigal (Saint Mary?s) and Mitchell Tyranski (Michigan State) kept Brewster off the board until the eighth inning, when Bishop came around on a Freeman single for the Whitecaps fifth and final run.

Andrew Schultz (Tennessee) threw 3.1 innings of relief Wednesday, allowing a single Y-D run. Although he didn?t allow any hits, Schultz walked four, three of which came in the ninth, and gave Y-D a sliver of hope.

The comeback wasn?t meant to be though, as a Quin Cotton ground out to Schultz ended things with the bases loaded.

Cameron Eden?s bases-clearing double in the third broke the game wide open. Brant Hurter was a single strike away from keeping this a one-run ballgame, but Eden put up a great fight and delivered the clutch hit.

The first-place Red Sox return back to the friendly confines of Red Wilson Field to host the Orleans Firebirds Thursday. First pitch is scheduled for 5:00 p.m.