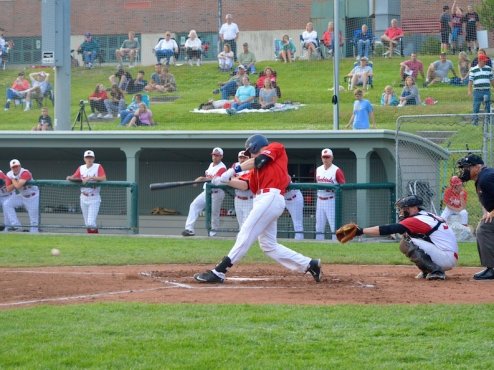 The Yarmouth-Dennis Red Sox(0-3) failed to put a run on the board in their Thursday night game against the Orleans Firebirds(2-1), losing by a score of 7-0 at Eldredge Field.

With only two hits recorded, both of which in the fifth inning, the Sox didn?t give themselves much of a chance to do any damage against Firebirds starter Eric Lauer of Kent State. Lauer finished his win with 7 strikeouts, 3 walks, and 2 hit batters in five innings of play.

Despite the high amount of Sox players awarded first base on walks or after being hit by pitches, they could not capitalize. With 5 walks, including 2 in the ninth inning, and an average of 5.76 pitches per at bat, Sox players are staying patient at the plate but that alone cannot score runs. The Red Sox stranded 12 runners throughout the nine innings of play, unable to get a single player across home plate.

Brett Adcock, a junior from University of Michigan, got his first start against the Firebirds on Thursday and pitched only four innings for the Sox. After going 10-4 this past season with the Wolverines, there were high hopes for the lefty coming into his CCBL debut. After retiring his first 8 batters, Adcock seemed to break down in the fourth inning. Adcock had three straight walks to load the bases and then 3 hits to give the Firebirds a 5-0 lead.

Kyle Lewis, Colby Woodmansee, and Alex Call contributed hits for the Orleans Firebirds in that long fifth inning. Lewis knocked in 1 run with a single, Woodmansee brought in 2 with a double, and Call had a 2-RBI single before being thrown out by Sean Murphy trying to steal second to end the inning.

There were some notable defensive changes in the Sox?s starting lineup. Connor Wong moved to third base, Brady Conlan to first, and Mike Marcinko came in at second. While much of the action from the Firebirds bats was in the outfield, the infield defense seemed much more relaxed than it has in their previous games. Connor Wong, coming into the game leading the CCBL with 4 errors on the season, committed another in the third inning before being moved to second base in the seventh. It looks like the Red Sox managerial staff are going to be making adjustments in the starting lineup until they can find the right infield combination to move forward with.

The Y-D Red Sox and Orleans Firebirds will face off three more times in the next five days, including a game tomorrow at 5 p.m. at Red Wilson Field.