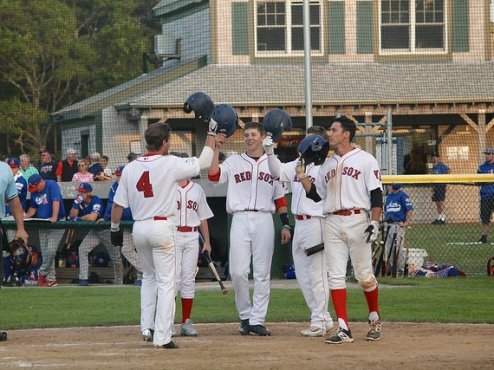 For many innings, it looked like it would happen again. ?Chatham had opened a six-run lead and it seemed as if the Red Sox would spend another devastating night away from the win column. ?Fans at ?Red? Wilson Field were hardly given excitement when centerfielder Kyle Isbel hit a single to lead off the eighth inning. ?For the Red Sox, that hit was simply a sign of offense in a game that lacked much of it. ?Until then.

“Baseballs a crazy sport,? Isbel said. ?We knew we were in the game, we were just one hit away from breaking things open.?

The Red Sox scored nine runs in an explosive eighth inning on Wednesday in which it came back from six down to win the game 11-8. The comeback was capped by the second set of back to back home runs of the night in what was a huge offensive burst. This was a huge morale-boosting win for Y-D following a game in which the team, itself, blew a six-run lead.

“With that (game) recently in mind, any game is safe,? said Second baseman Nico Hoerner. ?It felt pretty similar, we just reversed the roles today.?

Following Isbel?s single, the Red Sox kept on adding and a collection of past balls from Chatham?s catcher put the game within reach. ?The Red Sox dugout, as well as the ballpark crowd, began to come alive as Y-D marched back.

The game featured a ton of heroics from some of Y-D?s premier players, but a clutch cameo from reserve first baseman Carter Pharis really proved that the game was within reach.

“This was a team win,? said Manager Scott Pickler said. ?Pharis gets that key hit and we just build off each other.?

In the fourth inning, the Red Sox got its only early offense off of back to back home runs from catcher Kole Cottam and third baseman Nicholas Quintana, who was playing his first game as a member of Y-D.

Prior to this game, the Red Sox had only had one home run to its name. ?Carlos Cortes blasted one to center in the crushing collapse on Tuesday. But, that quickly changed after the Sox went back to back for the second time of the night capping off a four home run game for the team.

The most notable of those came as Nico Hoerner stepped up to the plate with men on first and second, five runs into the comeback.

“(I wasn?t thinking) a home run,? Hoerner laughed. ?That?s not usually what I do, but I?ll take it.?

The home run gave the team a two-run lead. ?The crowd exploded as Hoerner rounded the bases ready to jump on his teammates in the dugout. ?In his short time with the Red Sox, he?s used to the spotlight, being a key contributor in both Wednesday?s win and the close 2-1 victory on Monday.

Following the breakdown on Tuesday, Y-D was in desperate need of a character building win. ?It got just that as the resilient fight against Chatham taught the Red Sox that no game is out of reach.

“We?re always are in the game when we?re here,? Hoerner said. ?Maybe three weeks down the road when we find ourselves in another position like this??

“It means nothing,? Pickler interrupts. ?We got another game tomorrow.?

Hoerner laughed as he took in the information from his coach. ?Following yesterday?s loss, Y-D showed no evidence that they could recover when down big, he knows there is a long season ahead and there is something to take away from every milestone game.

“At least now we?ll have a chance.?