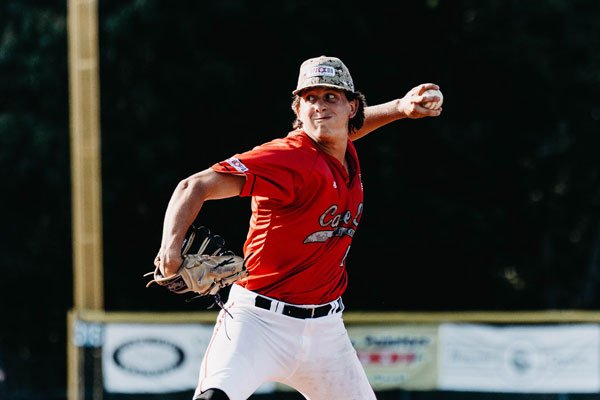 After giving up three runs in the bottom of the sixth to allow the Brewster Whitecaps to tie the game, the Yarmouth-Dennis Red Sox responded instantly with two runs in the top of the seventh. They escaped a shaky bottom half thanks to an outfield assist from Homer Bush Jr. for a 5-4 win over the Whitecaps Sunday night at Stony Brook Field. The game was called after seven innings due to darkness.

On the mound, Connor Markl tossed five no-hit innings, walking two, and striking out a pair. But for a man who held an opposing offense without a hit, Markl remained humble.

“It wasn’t as sharp as I wanted,” Markl said. “I just tried to play to my strengths today and execute as many pitches as I could.”

Markl kept the Whitecaps from making any loud contact against him, and the defense behind him dazzled with a few nice plays to take away hits. Hunter Haas made a solid play on a grounder up the middle to lead off the bottom of the first, Braden Montgomery, Cole Carrigg, and Homer Bush Jr. all ran down fly balls in the outfield, and Luke Shliger caught a runner stealing in the fifth.

“Some of the times today, it was the coaching aligning them perfectly in the shifts,” Markl said. “It’s great knowing I have the defense behind me that’s going to make plays like they did today.”

Offensively, the Sox were held scoreless through the first four innings. Carrigg hit into a tough-luck double play on a hard liner right back to the pitcher in the first to quash a scoring threat. Caden Connor twice reached scoring position, but was held there in the second and was caught stealing third in the fourth.

The Sox also had runners on the corners with two outs in the fourth, but they couldn’t capitalize.

With the offense consistently knocking on the door, it helped boost Markl along.

“I was doing what I could for our offense because I knew they were going to put up the runs,” Markl said. “I was just trying to do my part to help us get the win.”

The Sox finally put up the runs in the fifth. Homer Bush Jr. legged out an infield single, then flew around to third on an errant pickoff attempt from Brewster’s Heston Tole. Four pitches later, he scored on another error, as a Luke Shliger grounder snuck through Davis Diaz at third.

“I had some struggles a bit early in the season, and to get out of that funk and perform at a high level is what I wanted to do,” Bush said. “I think I can do things on the baseball field that other people aren’t able to do with my speed, so getting to show off that tool is big for me.”

Y-D added two more in the fifth on a Braden Montgomery single that found its way through an infield that was shifted in. Montgomery rolled it down the first base line, and Carrigg used his speed to follow Shliger and score all the way from second.

But the Red Sox ran into trouble in the bottom of the sixth. After Markl was pulled due to his pitch count, Ivran Romero gave up a single and a walk before he was subsequently removed from the game. Sam Klein came in to get the first out of the inning, but he gave up a loud ground-rule double that put Brewster on the board, before allowing the Whitecaps to draw within one by scoring on a wild pitch.

Y-D Field Manager Scott Pickler brought in his third new pitcher of the inning, Luke Jewett, to try and escape the jam. However, Jewett gave up a first-pitch RBI single to Carson Demartini which tied the game at three.

Jewett eventually escaped the inning by striking out Ryan Lasko and getting some help from the arm of Shliger, who threw Demartini out trying to steal second. But the damage had been done, and Y-D needed to score to get back in front.

After Bush walked, Carrigg singled to left to put runners on first and second. On the next pitch to Montgomery, the two fastest Red Sox runners executed a perfect double steal — Bush went up to third, and Carrigg to second. That allowed Bush to score on a wild pitch later in the at-bat.

With the lead reestablished, Jewett went back out to try and seal the win. But after getting one out, he walked the bases loaded. Pickler called for Shaun Gamelin out of the bullpen, who threw one pitch — a fly ball to left field.

Homer Bush Jr. tracked the ball down in deep left, and threw immediately to third. The runner tagging from third scored, but Bush hit the cutoff man Hunter Haas and the Red Sox got the final out of the game on a close play at third base, as Javier Vaz tried to move up from second.

“Cole Carrigg got me with some good communication out in center,” Bush said. “I knew that I didn’t have a really competitive play to home, and he was telling me to go to third right away … I’m not going to act like it was a laser beam. It was accurate, that’s all I was looking for. Haas made a good play with a good transition.”

The Red Sox escaped the jam and secured their second win over the second-place Whitecaps in the past four days. In three games with Brewster over the last week, Y-D went 2-0-1 to strengthen their grip on the top spot in the East Division. The Red Sox have won four of their last five games.

“We’re always in it,” Markl said. “We’re going to keep competing our butts off every day, and I’m happy to be a part of it.”

After an off day on Monday, the Red Sox face the Harwich Mariners for the final time in the regular season, with first pitch at Red Wilson Field set for 5 p.m.