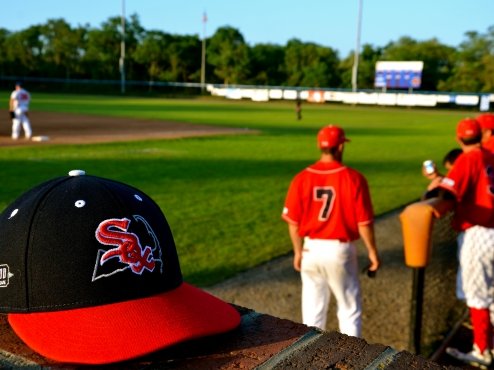 The Yarmouth-Dennis Red Sox traveled to Spillane Field on Wednesday night to take on the Wareham Gatemen. After falling behind five runs, the Red Sox scored seven unanswered, four of which were driven in by left fielder Hunter Cole (Georgia). The Gatemen tied the game up with a two-run eighth inning to send the game into extra innings. But the Red Sox scored two runs in the tenth inning to take the lead for good and improve their record to 5-9 on the season.

The Gatemen jumped out to an early lead thanks to a four-run first inning. Y-D starting pitcher Cody Poteet (UCLA) allowed five hits in the inning to put the Sox in an early hole. A leadoff double by Wareham designated hitter Willie Calhoun (Arizona) and a hit batter allowed Andrew Knizner (NC State) to drive in two runs with another double. RBI singles by Kyri Washington (Longwood University) and Jake Little (Memphis) extended the Wareham lead to 4-0 after the first inning.

The Red Sox battled back, despite the early deficit. Cody Poteet settled in after his shaky first inning and allowed only one more run (a solo home run from Washington) in four additional innings pitched, and struck out six. The Y-D offense chipped away at the 5-0 lead, thanks in large part to the middle of their order. Jordan Tarsovich (VMI) put the Red Sox on the board in the fourth with a solo home run. Tarsovich reached base five times, scored three runs, and went 4-6 on the night to improve his average to .409 on the year.

The Red Sox continued to chip away at the lead in the fifth inning. Following Josh Lester?s (Missouri) first hit of the season on a beautiful bunt down the third baseline, outfielder Andrew Stevenson (LSU) hit an RBI single to score Lester and make the score 5-2. The sixth inning began with Tarsovich reaching base on an error, followed by a single by Rob Fonseca (Northeastern) to put Hunter Cole (Georgia) up at bat with a chance to tie the ballgame with one swing of the bat. Cole did just that, as he belted a three-run home run to tie the game at 5-5. It was Cole?s third home run in twenty-four hours after homering twice in Tuesday night?s game versus Chatham.

The middle of the order continued to provide a spark for the Red Sox in the seventh. After Tarsovich reached base on another single and Fonseca forced a walk from Wareham pitcher Scott Effross (Indiana), Cole hit an RBI-single to put the Red Sox ahead 6-5 for their first lead of the ballgame. The Sox would tack on one more run in the seventh after an error by the Gatemen scored Josh Lester.

The Gatemen would not go down easy, however, as a two-run eighth inning tied the game at 7-7. Red Sox pitcher Parker Bugg (LSU) allowed three straight singles to Gatemen hitters Danny Rosenbaum (Louisville), Jake Little (Memphis), and Charlie Warren (Rice) to load the bases with one out. A single by pinch-hitter Chris Chinea (LSU) scored two to tie the game.

Tarsovich reached base in the ninth for the fifth time in the game with a bunt single and advanced to second on a passed ball. With the game tied, Cole stepped in to the box with a chance to put the Red Sox ahead for good. Cole did his job, singling to right field, but Gatemen right fielder Charlie Warren (Rice) threw out Tarsovich at the plate on a controversial call. After a scoreless ninth for the Gatemen, the game moved to extra innings.

Brennon Lund (BYU) got things going for the Red Sox in the tenth with a leadoff single. Pinch-hitter Michael Foster (Northeastern) followed him up with a single of his own to put two runners on for the Red Sox with nobody out. Wareham manager Cooper Farris brought in pitcher Drew Harrington (Louisville) to replace Anthony Kay (UConn) and hopefully get the Gatemen out of the inning unscathed. After an intentional walk loaded the bases, Harrington walked Andrew Stevenson (LSU) to put the Red Sox up 8-7. A sacrifice fly from Donnie Walton (Oklahoma State) scored Foster to extend the lead to 9-7.

Josh Pierce (Kent State) was left in to close out the game for the Red Sox in the bottom of the tenth. The Gatemen did not make it easy for Pierce, as singles by Rosenbaum, Little, and Warren loaded the bases for the Gatemen with nobody out. Pierce did what he had to do to hold on for the Red Sox though, inducing a 6-4-3 double play. After a run scored on the double play, Calhoun had a chance to tie the game when he came to bat with a runner on third. However, Pierce struck him out and the Red Sox won the game 9-8.

It was one of the most entertaining and exciting games of the year, and the win improved the Red Sox record to 5-9. The Gatemen fell to 4-10 with the loss. The Red Sox return home on Friday, June 27th to take on the Falmouth Commodores. First pitch is set for 5:00pm.