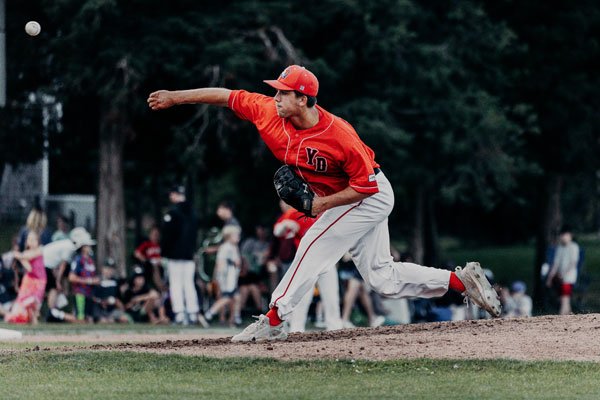 Eric Yost got a tough-luck loss in each of his three prior starts this summer for the Yarmouth-Dennis Red Sox.

He gave up three or fewer runs in all of his appearances, including a five-and-a-third inning shutout performance where the lone baserunner he left on in the fifth scored the eventual winning run from first. There was no game where he pitched poorly, yet he entered Wednesday’s game with an 0-3 record.

He didn’t let that trend continue.

Yost controlled the flow through 6.2 innings against Falmouth Wednesday night, limiting the Commodores to just four hits and ceding only an unearned run while keeping traffic off the basepaths via ground balls. Cole Carrigg drove in two at the plate, and the Red Sox earned a 3-2 win over the Commodores at Guv Fuller Field. Yost earned the win for the Red Sox, his first of the summer.

It was the Red Sox first win since Friday, snapping a three-game winless streak (0-2-1). The win was Y-D’s third in as many tries over the Commodores.

Yost, a rising junior at Northeastern, only struck out two over 6.2 innings, but induced ground balls all night long. He got three double play balls to work out of traffic and twelve total outs on the ground.

“I know if I make pitches, they won’t really hit it hard,” Yost said. “That’s what I did all game.”

After giving up a one-out single in the second, Yost induced a grounder to second baseman Chase Meidroth to end the inning. In the third, he picked up two quick outs after a single and a grounder to Hunter Haas at short. And in the fourth, he needed only six pitches with a lineout, a hit by pitch, and a double play.

“The defense was great,” Yost said. “I was just making my pitches. They weren’t really hitting it hard — right into the ground. [It was] great to have the defense making plays behind me.”

Haas shined all night long at short. He started two double plays, including with a backhanded snag. In the ninth, he went deep into the hole to field a grounder and fired a strike all the way across the diamond for the out.

“Hunter Haas played an unbelievable game at shortstop,” Y-D Field Manager Scott Pickler said. “Every one of those balls was not an easy play to make. I thought it was more Hunter Haas’ day than anyone else.”

At the plate, the Red Sox gave Yost a lead in the fourth with a Cole Carrigg RBI double. In the sixth, they added two more by stringing together four hits, including RBI knocks from Jonny Long and Carrigg.

Yost worked into the seventh, the first Red Sox pitcher to make it that far in a start this summer. After hitting Falmouth’s Andrew Pinckney with two outs, Pickler pulled him for Bayden Root. Though Root got out of the inning, Pinckney came around to score on an error after stealing two bases. The Commodores added another in the eighth after Alex Mooney singled and swiped two bases of his own to score on a groundout.

Pickler went to Luke Jewett with two outs in the eighth to try for a four-out save. He ended the frame with a strikeout, then got two grounders to Hunter Haas and another strikeout to finish off the win.

Carrigg, Meidroth, and Caden Connor all had multi-hit days for the Red Sox at the plate. Though Y-D only hit one extra-base hit, they moved runners along and got hits with runners in scoring position. Six of Y-D’s eight hits came in the two innings in which they scored runs.

Now that the Red Sox are back in the win column, they’ll look to keep the momentum going into a home-and-home with Harwich. Y-D travels to Whitehouse Field Thursday night at 6:30 p.m., before hosting the Mariners at Red Wilson Field Friday at 5 p.m.