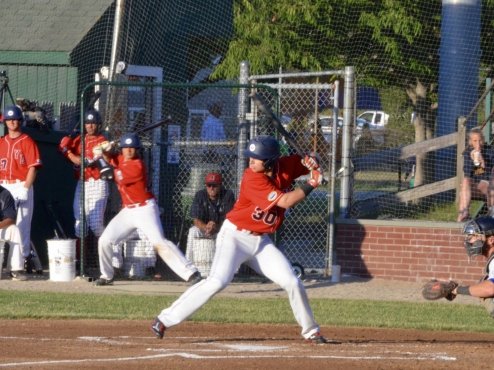 The Yarmouth-Dennis Red Sox (4-5) won their fourth straight victory on Sunday night, 7-0, over the Chatham Anglers (4-5) at Veterans? Field in Chatham. The Red Sox were able to capitalize on five errors committed by the Anglers on defense, tallying four unearned runs. Deon Stafford Jr. (Saint Joseph?s) returned to the field after being sidelined with a hand injury, with Matt Whatley (Oral Robers) getting the start at DH for the Red Sox. Mitch Hart (Southern California) earned the win for the Red Sox, moving to 1-1 on the season, while Trevor Gay (UNC) got the loss.

Hart (1-1) took the hill for the Red Sox, looking to rebound after being tagged with the loss against Harwich earlier in the season. Hart (Southern California) allowed seven runs in five innings against the Mariners, but showed instances of excellence in the middle of his start which was reason for optimism.

Gay (0-2) got the start for Chatham, making his second start of the season for the Anglers. Gay struggled in his first outing, allowing four runs on eight hits in three innings against the Brewster Whitecaps. Gay played his freshman season at UNC Charlotte in 2015, and posted a 5.98 ERA across three starts and 20 relief appearances. He transferred to UNC Chapel Hill after his freshman year, but had to sit out the 2016 season due to NCAA transfer eligibility rules.

The Red Sox struck first in the top of the third, as new addition Dillon Persinger (CS Fullerton) started the frame with a single between the shortstop and third baseman. He then stole second, which is impressive because Gay works very quickly to the plate when pitching out of the stretch. After a wild pitch moved him to third, Corey Dempster (Southern California) drove him in with a shallow sacrifice fly and the Red Sox took an early 1-0 lead.

The Red Sox were far from done in the inning, however, as Kevin Smith (Maryland) got the offense going again with a ground rule double over the left field fence. Will Toffey (Vanderbilt) and Whatley both reached on errors, and Smith came around to score to make it 2-0. Brendon Skidmore (Binghamton) and Matt Winaker (Stanford) later added singles in the inning that drove in two more runs, extending the lead to 4-0.

New addition Tyler Houston (Butler) continued to hit well for the Red Sox, hitting a ground rule double down the left field line in the top of the fifth to score Stafford Jr. and add push across another run. Persinger followed with a groundball that Hunter Lee (High Point) couldn?t handle at third base, and Skidmore scored on what was the Anglers? fifth error of the game, extending the lead to 6-0.

In the seventh, Skidmore continued his hot streak at the plate, smashing a 0-1 pitch from Reed Howell (Appalachian State) over the left field fence for a home run to make it 7-0 in favor of the Red Sox. Skidmore now has nine RBI this season, which is third most in the league.

Hart looked excellent on the mound this evening, shutting Chatham down over five innings and recording six strikeouts. He located well with his off-speed pitches and was able to keep the Anglers off balance at the plate. If he fell behind in the count, he battled back well and issued only two walks.

This is likely what separates this start for Hart from his start against Harwich last week, as he had trouble commanding his breaking ball against the Mariners, so hitters were able to sit and wait for the fastball. Hart was able to use his curveball against hitters from both sides of the plate, and used it to effectively draw swinging strikes.

The Anglers got the lead-off runner on base in each of the last six innings, but Y-D pitchers were able to settle quickly and prevent any damage.

Cre Finfrock (Central Florida) made a relief appearance, potentially suggesting that he?s been moved to the bullpen with the addition of RHP Erich Uelman (Cal Poly) to the roster.

The Red Sox will host the Harwich Mariners on Monday evening, and look to push the winning streak to five games. The game will begin at 5 p.m. at Red Wilson Field.