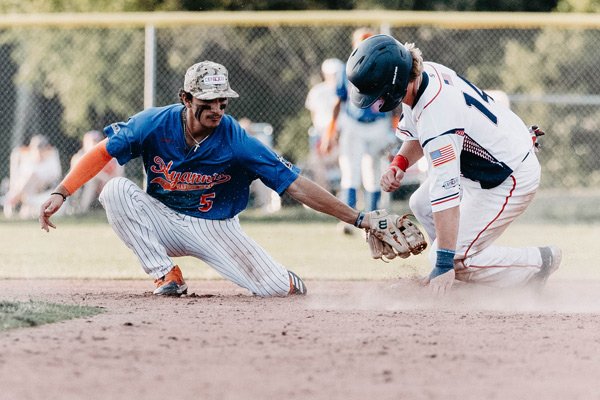 Despite five errors and a baserunning error that cost them a run, the Red Sox were able to salvage a point in the standings, tying the Hyannis Harbor Hawks 5-5.

It was an ugly start for the Red Sox, who allowed two runs to score in the top of the first, one of which scored on an error on a pickoff attempt to first base.

Hunter Haas was able to get Y-D on the board in the bottom of the third with an RBI single to cut the lead in half. Haas now has an eight-game hitting streak.

The top of the fourth was a defensive disaster for the Sox, as they committed three errors within the span of a minute, allowing Dominic Pitelli to score from second on a pickoff attempt, allowing Poncho Ruiz to get to second base on a groundball.

Of the three runs to Kris Bow’s name, only one run was earned. He has now allowed eight runs on the season, but just three of them are earned.

Sam Klein came in out of the pen and was able to work around the errors to limit the damage to just the one run in his first appearance of the summer. Klein went 2.2 scoreless innings without allowing a hit, striking out two.

The Sox offense picked up the defense in the following innings, scoring another in the fourth on a Drew Bowser RBI single. In the bottom of the fifth, the Red Sox put up three runs, despite a baserunning miscue that put two outs on the board before a run came home.

Klein, Shaun Gamelin and Dylan Ray cruised through the eighth inning, holding onto the two-run lead.

“(He threw) very good, Klein helped us out,” Pickler said. “Ray came in and I thought threw a pretty good game.”

It all unraveled in the ninth, however. Another error allowed the leadoff batter to reach safely.

Pickler disputed the call at first, as it appeared that Caden Connor was able to get a tag on the runner, but the umps ruled the call stood after a meeting.

“A terrible way to start an inning,” Pickler said after the game.

Three singles brought around two runs to tie the game, and the Sox couldn’t bring across the winning run in the ninth, resulting in Y-D’s third tie of the season.

The Red Sox enjoy an off day tomorrow before traveling to Falmouth for the first time this summer on Wednesday. First pitch is set for 6 p.m.