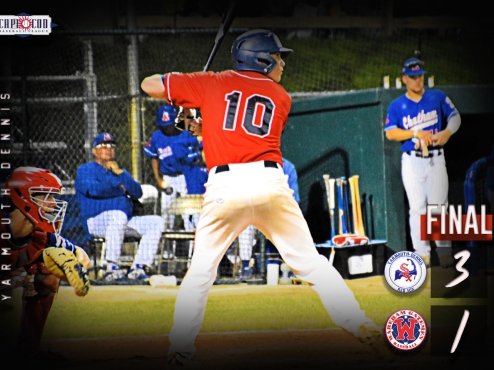 SOUTH YARMOUTH ? As Yarmouth-Dennis Red Sox Manager Scott Pickler and Wareham Gatemen Manager Jerry Weinstein met with the umpires at home plate prior to first pitch, the Red Sox starters played Duck, Duck, Goose with a mob of young ballplayers who got the opportunity to run out onto the field with their heroes.

It was clear that the Red Sox had long forgotten about the previous night?s 15-1 loss to the Chatham Anglers and were ready to perform in front of over 2,300 fans. Behind another solid outing by Pitcher of the Week John Beller (USC), the Red Sox ? the second-most productive offense in the Cape League ? defeated the league?s best offense 3-1. The highly-anticipated game was featured on Fox College Sports.

Beller, who got the start for the Red Sox and the win, was awarded Coca-Cola Pitcher of the Week by the Cape League after striking out eight batters and allowing just one hit in Y-D?s two-hit shutout against the Bourne Braves last Monday. He looked exceptional again last night, giving up just four hits and one run over five innings. Cullen Kafka (Oregon) threw three scoreless frames, and Taylor Dollard (Cal Poly San Luis Obispo) proved why he?s the Red Sox?s go-to closer. He has yet to give up a single run or a walk, and made an impressive diving catch on a failed bunt attempt.

The Y-D offense came alive as well. Wyatt Young (Pepperdine) went 2-4 with an RBI, Austin Wells (Arizona) went 2-4 with a run and a double, Riley King (Georgia) went 2-4 with a double, and Tate Samuelson (Cal Poly San Luis Obispo) went 1-3 with a home run. Young now leads the team with a .372 average, while Wells and King are hitting .304 and .333, respectively. Samuelson is hitting just under .300 but has been heating up.

The Red Sox offense got on the board in the bottom of the fourth inning. Wells turned a pop fly into right field into a double, then advanced to third on a single by King. With runners on the corners and one out, Jack-Thomas Wold (UNLV) hit a double-play ball to the Wareham shortstop, but the ball was muffled by the second baseman, resulting in two safe runners and a tie ballgame.

In the bottom of the seventh inning, Samuelson smoked a no-doubter over the left field fence to make it a 2-1 game. Brad Beesley (Cal Poly San Luis Obispo) drew a walk and advanced into scoring position on a failed pickoff attempt, then was moved to third on a perfect sac bunt by Noah Cardenas (UCLA). Young got his second hit of the day on the next play, this time an RBI single into right field to make it a 3-1 game.

Players to look out for: Former Red Sox shortstop Luke Waddell (Georgia Tech) left the Cape about a week ago to try out for the USA Baseball Collegiate National Team, and yesterday USA Baseball announced that he made the 26-man roster. In his absence, Young ? who played second base all spring for Pepperdine ? has sparkled at shortstop and earned his way to the top of the Y-D lineup. Young is the smallest player on the Red Sox roster ? listed at 5?7? ? but what he lacks in size, he makes up for with his speed and consistency.

King has also been a key player for the Red Sox so far this summer. He redshirted for the Bulldogs in 2017 and only got six at-bats in 2018, but this past spring King hit .295 in 241 at-bats. He currently hits in the heart of the lineup for Y-D and has made several athletic plays at both third base and in the outfield.

Cardenas isn?t the most eye-catching player on this Y-D roster, but he has been one of the most fundamentally sound players. His framing is excellent, he proved he has a cannon behind the dish when he threw out Wareham?s speediest runner ? Darren Baker (California Berkeley), son of former MLB great Dusty Baker ? and he is currently 5-15 at the plate. Wells is arguably the most valuable player on this team, and having another great option behind the plate is huge when it comes to preserving Wells? energy and keeping him healthy.