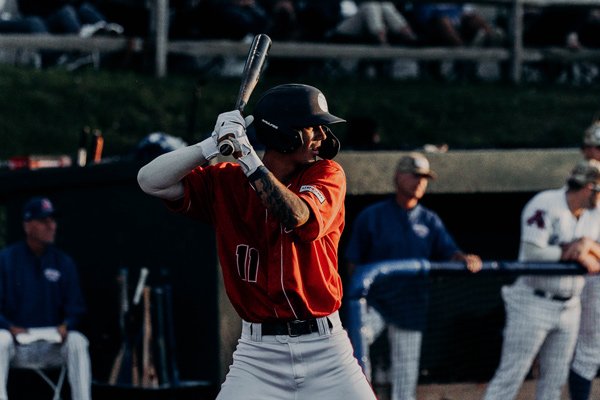 After snapping their five-game winning streak yesterday, the Y-D Red Sox bounced back with an 8-1 win over the Chatham Anglers at Veterans Field on Thursday.

The Sox took advantage of multiple Chatham defensive miscues with timely hitting to jump out to an early lead and never looked back.

In the top of the second, Cole Carrigg was caught leading too far off of first, and Angler catcher Dominic Tamez fired to first for the back pick. Carrigg started to advance to second, and instead of throwing to second, Caden Grice threw to third to try to get an advancing Caden Connor. Connor beat the throw to extend the inning.

A few pitches later, Jordan Thompson placed a single into left field to score them both.

Carrigg caused chaos on the basepaths a second time in the 4th. After reaching on a walk, Carrigg stole second. He was caught leading off too far again, and Chris Villaman turned around to pick him off. When Carrigg broke for third, Chatham second baseman Roc Riggio missed the throw to third, allowing Carrigg to not only reach third but come all the way around to score.

“That was terrible baserunning,” Carrigg said while laughing postgame. “I got lucky, I guess if you make them work fast enough…” he said, chuckling through a shrug.

In the sixth, Chase Meidroth scored on a balk, and Thompson hit his second two-run single, giving him four RBIs on the day. He had three coming into the day.

“Me and Pick have been working a lot in the cages,” Thompson said. “Just taking it day by day, and today I was able to show some results.

“Just keep taking it day by day and hopefully it continues.”

Thompson isn’t the only Y-D bat that’s heating up, either. Coming into the day, Hunter Haas was six for his last 11 after starting the season 5-24. In the top of the 7th, he hit his first home run of the season, a two-run shot over the left-field fence.

“I’m just happy to be back playing every day,” Haas said after receiving a mini-Gatorade bath from his teammates. “It just feels good to get back into a groove, I’m starting to feel confident again, comfortable with everything, it’s been good.”

On the mound, Grant Taylor struggled with his command at times but was able to miss bats and generate weak contact, striking out seven across four innings. His lone mistake on the night was sent onto the hill beyond the right-center fence, a solo shot from Guy Garibay Jr.

After being no-hit yesterday, Chatham managed just three hits and struck out 14 times.

The Red Sox have now won 10 of their last 13 games to improve to 10-5-2, and they become the first team in the East division to reach double-digit wins. They remain in first place with 22 points, four ahead of both Brewster and Orleans.

The Sox are on the road tomorrow, traveling to Eldredge Park for the second time this season tomorrow. On Opening Day, the Firebirds and Red Sox played to a 4-4 tie at Eldredge.

In two other meetings at Red Wilson Field, they split, with each team taking one win. First pitch in Orleans is set for 6:30 p.m.