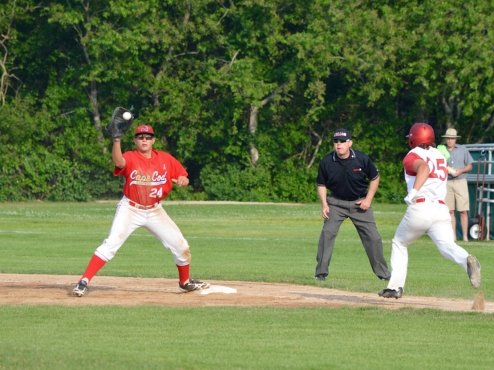 In the second game of their home and home against the Orleans Firebirds(3-1) on Friday night, the Yarmouth-Dennis(0-4) fell nine runs short of a victory.

The Red Sox were looking for their first win of the season but could not produce enough offensively to keep up with the Firebirds.

Starting pitcher Dan Zamora struggled right out of the gate in his first start of the season, giving up 4 runs on 5 hits, including one home run. Zamora threw 62 pitches in only 2.1 innings.

Ryley Maceachern relieved Zamora and pitched 4.1 innings, holding the Firebirds scoreless until a long seventh inning. With 49 strikes on 90 pitches in the outing, Maceachern had a decent outing despite the five runs allowed.

After being down early after a tough first inning, the Red Sox looked to make a comeback. In the bottom of the third, Kyle Kempf and Connor Wong capitalized off of Firebird errors to score the Sox?s first run. The Sox came back in the bottom of the fifth and put 2 more runs on the board off of a triple from Cole Billingsley and more mistakes by the Orleans defense.

For the first time this season, defense was not the problem for the Red Sox. The Sox only had 4 hits, which, compared to Orleans? 15, was not enough. Cole Billingsley led the Sox with a triple, run, and RBI while Ryan Noda, with one hit and one walk, also found a way to get on base.

As the fog set over Red Wilson Field in the seventh inning, the victory became farther and farther out of reach when the Firebirds added 7 runs, including a grand slam from Bobby Dalbec. All but one of the Firebirds? starters recorded at least one hit in Friday?s game, including Karl Lewis who went 3 for 5 with a home run.

The Red Sox will play the Bourne Braves tomorrow at 6 p.m. at Doran Park before wrapping up the weekend with a double-header against the Cotuit Kettleers at home on Sunday. The Yarmouth-Dennis Red Sox and the Orleans Firebirds will face off again on Tuesday, June 16th at Eldredge Field.