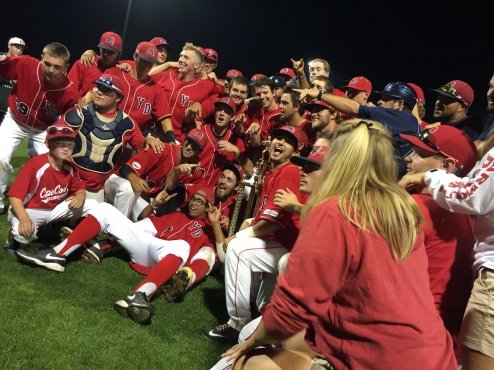 HYANNIS, Mass. ? The Yarmouth-Dennis Red Sox are Cape League Champions! The Sox won 8-1 in the decisive game three on Wednesday night against the Hyannis Harbor Hawks.

McKeon Park in Hyannis was packed with over 6,400 fans for the game, which was postponed a day due to rain. After Hyannis took game one by a score of 8-1, the Red Sox came back rolling with two straight wins for back-to-back titles.

Manager Scott Pickler was at the field early Wednesday morning and, when asked why, he said, ?I was going to help them get the field ready!?

The energy and momentum was all there for the Red Sox on Wednesday after beating the Harbor Hawks 9-3 in game two on Monday night. The Sox followed up that incredible offensive show with an all-around lockdown performance to close out the series.

The Red Sox pitching staff has been extremely reliable throughout this entire postseason and they didn?t disappoint on Wednesday. Brandon Bailey (Gonzaga) pitched six innings, only allowed one hit, and faced the minimum number of batters.

Bailey said, ?I?m very confident anytime you can go to war with these guys behind you. I?m truly blessed to have the opportunity to play in this league. These guys come out to play every day and give it their all every day. I had no doubt in my mind that we were going to grind one out tonight.?

Ben Bowden (Vanderbilt), the most dominant pitcher in the Sox?s arsenal, put together three consistent innings for the Red Sox after Bailey?s exit.? He struck out six batters and gave up his first run of the summer in the ninth inning.

Bowden, co-MVP of the series, pitched 12.2 innings in the postseason and had an ERA of .71 during that span. Donnie Walton (Oklahoma State), the second-year Sox, anchored the infield all season at shortstop and was also awarded co-MVP honors.

The Red Sox offense came out firing against Hyannis? starter Devin Smeltzer (Florida Gulf Coast), loading the bases and scoring a run in the first inning. After ten hits through seven innings, the game was finally put out of reach by Cole Billingsley?s (South Alabama) three-run home run.

All-Star Billingsley also came up with big catches in center field to keep the Harbor Hawks off the bases. When asked how it felt to meet his teammates at home plate after he hit his home run, he said, ?It was an unbelievable game and an unbelievable team. This summer has been awesome and for that moment to happen, it was unreal. I was really excited and I was really happy to see all my teammates pumped up.?

Everyone in Y-D?s lineup showed up to play. The Red Sox put together 19 hits compared to Hyannis? six.? In the last two games of the series, the Sox had 37 hits. Gio Brusa (Pacific) went 3-for-4, co-MVP Walton went 3-for-6, and Tommy Edman (Stanford) went 3-for-6 with two runs.

Pickler said, ?(This team) was different because it wasn?t as talented at certain times but they played as hard as any team I?ve had. They rallied around the Donnie Waltons, the Tommy Edmans, the Billingsleys, and the guys that made the All-Star team and played so hard every night. Everyone rallied around those guys and Donnie Walton didn?t have much quit in him.?

With this Cape Cod Baseball League Championship, the Y-D Red Sox have won five titles in the past eleven years and showed Cape Cod that they are still the team to beat.