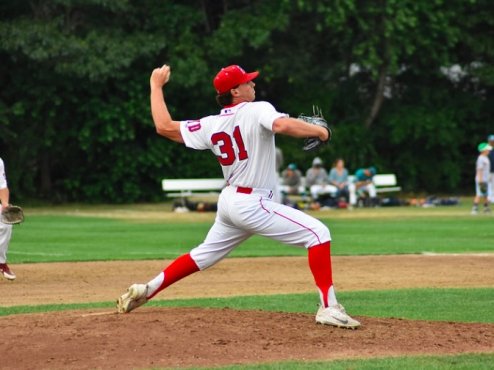 SOUTH YARMOUTH ? The Yarmouth-Dennis Red Sox fell behind early but a six-run fourth inning propelled them ahead of the Orleans Firebirds for the 8-4 victory on Wednesday.

Y-D jumped out to a one-run lead in the first after Quin Cotton (Grand Canyon) drew a bases-loaded walk that scored Jonny DeLuca (Oregon). The lead wouldn?t last long though, as Kenyon Yovan (Oregon), a collegiate teammate of DeLuca?s, hit a three-run home run in the top half of the second to put the Firebirds in front.

Neither team scored in the third, but the Red Sox tied the game in the fourth when Zach Zubia (Texas) launched his second home run of the season. Orleans starter Erik Miller (Stanford) couldn?t escape the trouble and allowed an RBI single to Brad Beesley (Cal Poly) and a two-RBI double to Noah Campbell (South Carolina) before his day was over. Shay Smiddy (Louisville) came on in relief of Miller, but couldn?t limit the damage as Y-D scored another run on a wild pitch. The Red Sox sent 11 men to the dish in the inning.

Brant Hurter (Georgia Tech) started for the Red Sox but only lasted three innings. He allowed three runs on four hits and one walk on the evening before being replaced by Mitchell Tyranski (Michigan State).

Tyranski turned in one of his finest outings of the season, striking out three in 2.2 innings and earning the win Wednesday. Red Sox All-Stars Sam Kessler (West Virginia) and Ryne Nelson (Oregon) also pitched in relief, with Kessler allowing a single run in 1.1 innings of work and Nelson striking out two in a scoreless final inning.

Every Red Sox starter reached base at least once on Wednesday. It shouldn?t come as any surprise seeing as Y-D leads the league in almost every offensive category, but it?s a testament to the quality and depth of the roster. Brad Beesley and Andrew Daschbach each collected two hits, while Quin Cotton walked twice. Beesley?s .373 batting average trails only Noah Campbell?s .379 mark for first on the team.

The Red Sox are off Thursday but return home Friday to host the Chatham Anglers in their final regular season matchup. First pitch at Red Wilson Field is scheduled for 5:00 p.m.