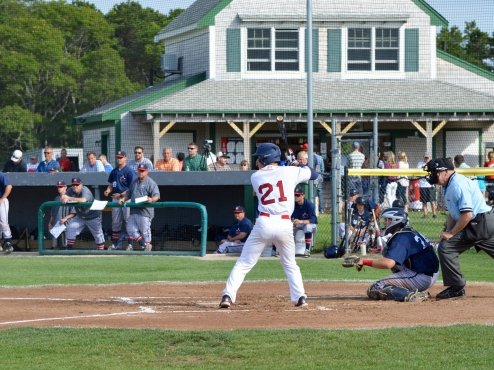 SOUTH YARMOUTH, Mass. ? Gio Brusa and Tommy Edman each homered and the Yarmouth-Dennis Red Sox mounted a late rally, but ultimately were defeated by the Brewster Whitecaps 8-7 at Red Wilson Field Thursday night.

Following the game, which was called after eight innings due to darkness, Brewster moves to 20-16, while Y-D is now 18-18.

The Red Sox got on the board in the bottom of the third after Stephen Wrenn (Georgia) tripled to bring in Brusa (Pacific).

After the Whitecaps added three runs in the fourth and another in the fifth frame, Y-D responded with two in the fifth and sixth innings. With one out in the bottom of the fifth, Brusa sent an 0-1 offering far beyond the outfield fence to record his seventh home run of the summer. Josh Vidales (Houston) followed up later with a base hit, scoring Luke Bonfield (Arkansas) to make the score 6-3 in favor of Brewster.

Y-D narrowed the margin to one the following inning. After Cole Billingsley (South Alabama) tallied a leadoff bunt single, Tommy Edman (Stanford) clubbed his second dinger to close in at 6-5.

Brewster extended its lead to 8-5 by the middle of the eighth, and with darkness looming, it became clear that a Red Sox rally could not elapse multiple innings. Edman and Donnie Walton (Oklahoma State) singled, keeping the game alive after two quick outs to begin the frame. After Brusa worked a walk to load the bases, Wrenn tapped a dribbler back to the pitcher, plating Edman and keeping the bases loaded while making the score 8-6.

Bonfield was hit by a 1-2 pitch to score Walton, bringing Ryan Noda (Cincinnati) to the dish and the tying run in Y-D newcomer Dallas Carroll (Utah) to third base. Noda chased after the first pitch and a snap throw to third caught Carroll off guard, ending the ballgame in favor of Brewster.

After Alec Eisenberg (Hofstra) worked through 3.1 innings, the Red Sox moved to the bullpen, using four relievers throughout the contest. David Ellingson, Chris Viall, Chad Hockin, and Doug Willey all saw time out of the ?pen.

The Whitecaps? Trent Paddon (Oregon) earned the win in relief (3-0), while Eisenberg (0-3) was hooked with the loss. Thomas Hackimer (St. John?s) posted his seventh save of the campaign.

The Red Sox play their second game at Red Wilson Field in as many nights Friday, hosting the Chatham Anglers at 5 p.m.