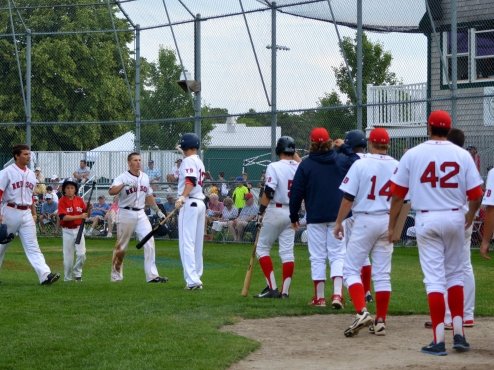 The Yarmouth-Dennis Red Sox finally got back to .500 when they beat the Harwich Mariners 2-0 on Friday night at Red Wilson Field. Cody Poteet (UCLA) was exceptional on the mound, and Y-D?s lineup did just enough to help the Red Sox win the game.

Poteet shut down the Mariners lineup for six innings, and relief pitchers Billy Strode (Florida State) and Phil Bickford (Cal State Fullerton) pitched excellent to hold onto to the win. Poteet went six innings, allowed only three hits, struck out ten batters, and was awarded the win for his efforts. Strode was also impressive in the game, as he pitched two scoreless innings and surrendered no hits. Red Sox closer Phil Bickford earned his fifth save of the season with a perfect ninth inning. Bickford continues to be a dominant closer for the Red Sox and has allowed no runs in his last five appearances out of the bullpen.

Y-D?s lineup gave Poteet, Strode, and Bickford just enough run support to get the win. Harwich starting pitcher Michael Boyle (Radford) was solid in the ballgame, but the Red Sox used a two-run third inning to give them the lead for good. The inning began with singles by Nico Giarratano (San Francisco) and Brennon Lund (BYU). After Jordan Tarsovich (VMI) reached based on a fielder?s choice, a wild pitch put two runners in scoring position for Andrew Stevenson (LSU). Stevenson delivered, singling up the middle to score both Tarsovich and Lund. A two-run lead was all the Red Sox pitching staff needed in order to secure the win.

The victory was Y-D?s fourth win in five games, and brought the Red Sox back to .500 with a (13-13) record. The loss dropped the East Division leading Mariners to (16-9-1) on the season. The Red Sox hope to continue their hot streak when the Orleans Firebirds travel to Red Wilson Field on Saturday, July 12. First pitch is set for 5:00pm.