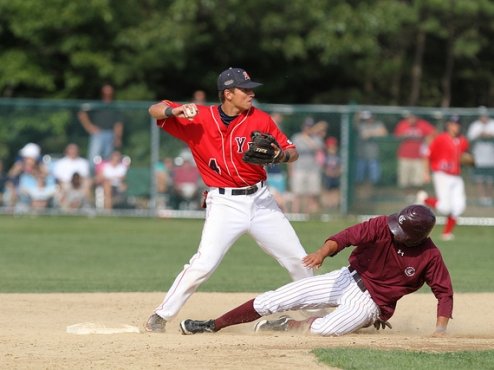 SAN FRANCISCO ? For the third consecutive year, the Yarmouth-Dennis Red Sox will be represented in Major League Baseball?s World Series. This year?s Fall Classic, which features the Kansas City Royals and the San Francisco Giants, began Tuesday evening with a decisive 7-1 victory for the visiting Giants.

Helping to compose San Francisco?s roster are Y-D alums Buster Posey ?06-07 and Joe Panik ?10. Neither are strangers when it comes to the spotlight.

Posey won back-to-back Cape League Championships with the Red Sox, was a two-time All-Star, and received Cape League All-League Team honors in 2006 and 2007. Among other things, he is known for spending the 2006 campaign primarily at shortstop before making the move behind the dish in 2007, helping pace the Red Sox to 31 regular season wins.

After being widely regarded as one of the top college catchers in the country and being drafted by the Giants in 2008, Posey ultimately made his MLB debut late in the 2009 season. The following year, he caught the entire San Francisco playoff run en route to his first World Series Championship, during which he batted .300.

Although Panik?s Major League career began much more recently, he too has seen his share of success. Following his sophomore season (2010) at St. John?s University, Panik came to Cape Cod and made an immediate impact. Playing in 42 regular season games, he earned a .276 batting average, clubbing two home runs and driving in 19 runs. The Hopewell Junction, N.Y. native also received All-Star honors and was named to the Cape League?s All-League team after helping the Y-D Red Sox to a runner-up finish in the Cape Cod Baseball League Championship.

He was drafted by the Giants in 2011 and, the following spring, received an invitation to Spring Training. It was on June 21, 2014 that Panik made his Major League debut. On Tuesday night in Game 1 of the World Series, he helped provide some insurance with a seventh-inning RBI triple as San Francisco cruised to victory.