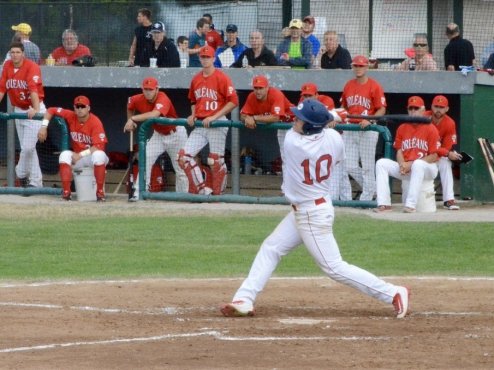 The Firebirds were first to put a run across the board. Adam Haseley (Virginia) started off the second inning with a leadoff single. Ethan Paul (Vanderbilt) ripped a double to the fence in left, advancing Haseley to third. Haseley then crossed the dish on a fielder?s choice by Keegan Mcgovern (Georgia).

In the fourth, Mcgovern smoked a solo blast into the trees, giving the Firebirds their second run of the game.

They added some cushion to their lead in the fifth, tallying two runs. Their third run was off of a fielder?s choice by Brian Miller (North Carolina), while their fourth came off of an RBI single stroked by Riley Mahan (Kentucky).

Y-D struck back in the sixth, sending two runs across the plate. Colin Lyman (Louisville) leadoff the bottom half of the frame with a single. Tyler Houston (Butler) followed up with a single to center, advancing Lyman. With the help of a balk, they were given a free base, and would both score on a wild pitch.

Shortly after, Orleans added another run in the seventh, giving them a three-run lead.

In the ninth, the Red Sox didn?t go down without a fight. With three straight singles, they had the bases loaded with only one out. Matt Whitaker (Stanford) drove in Kevin Smith (Maryland) on a fielder?s choice, closing the deficit to only two. However, Brandon Bielak (Notre Dame) shut the door and recorded his third save of the season.

Pat Vanderslice (Saint Joseph?s, 0-3) got the start for the Red Sox going 4.1 innings with three strikeouts.

Kirk McCarty (Southern Mississippi, 2-0) was on the bump for the Firebirds tossing 5.2 innings with seven strikeouts.

With the win, Orleans advances to 8-8 on the season, while Y-D falls to 7-9 with the loss.

Y-D faces off against the Bourne Braves on Wednesday at Bourne. First pitch is at 6 p.m.