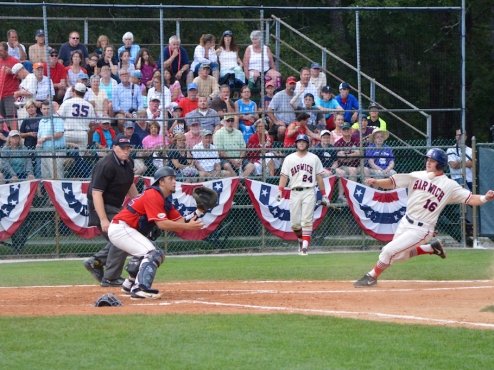 The Yarmouth-Dennis Red Sox (18-17) went down early against the Harwich Mariners (15-19) on Wednesday and never recovered. The 3-2 loss puts the Sox in fourth place in the East Division.

The Red Sox went deep into the bullpen on Wednesday night after starter Dustin Hunt (Northeastern) only lasted 3.1 innings. He gave up five hits, allowed three runs, and struck out five batters.

The Red Sox lineup looked different at Whitehouse Field. Usual leadoff man Cole Billingsley (South Alabama) rested for the day and infielder Will Toffey (Vanderbilt) suffered an injury and is done for the season.

Only Gio Brusa (Pacific) and Stephen Wrenn (Georgia) recorded hits in the game for the Sox. Brusa went 2-for-4 with a double and a run. Luke Bonfield (Arkansas) was credited with the RBI that brought Wrenn home for the Sox?s other run.

When asked whether he is paying attention to the playoff seeds, Brusa said, ?I?m just taking it one game at a time. I know that if we do that, it?ll take care of the rest of the season for us.?

With only 10 games left in the regular season, the Red Sox are focusing on one game at a time. Tomorrow they will play the Brewster Whitecaps (19-16) at 5 p.m. at Red Wilson Field.