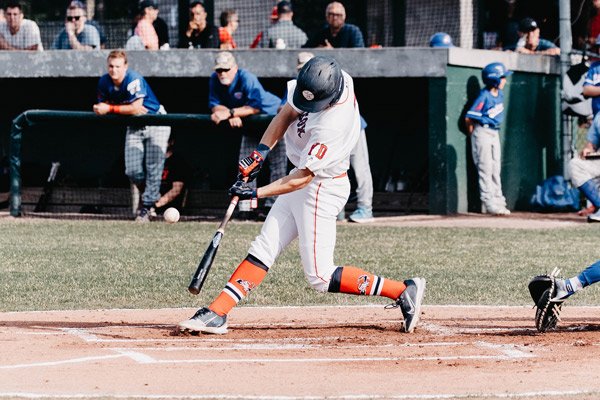 Y-D’s seven-game point streak came to an abrupt end on Saturday when the Red Sox lost to the Chatham Anglers 6-2 in seven innings at Red Wilson Field.

The Sox got off to an early 2-0 lead and led 2-1 after five, but Bryce Collins and Zach Jacobs allowed five runs over the final two innings before the game was called due to darkness.

Jared Lyons “didn’t have his best stuff,” according to manager Scott Pickler, but he was able to get through five innings allowing just one run and striking out six.

While the final two innings will get most of the attention, Pickler was quick to point out how Y-D had plenty of chances to extend their lead early, and that came back to haunt them later.

“We had all kinds of opportunities to blow this open in the first and second inning,” Pickler said, noting how they didn’t take advantage of those opportunities.

In the first two innings, the Red Sox were quick to jump on Chatham starter Cam Brown, getting four hits and two runs in the bottom of the first.

In the second, Y-D loaded the bases with just one out. Instead of adding on to a 2-0 lead, they stranded all three runners with a shallow fly ball and a strikeout.

Chatham was able to get on the board in the top of the third to cut the lead in half, but the Sox still seemed in control of the game.

Alex McFarlane came in out of the pen in the third, and any momentum the Sox had was quickly erased. He didn’t allow a hit through his first four innings, striking out six over the final five frames.

When Lyons left after the fifth, the wheels fell off. After Collins walked the bases loaded, Guy Garibay Jr. gave the Anglers the lead with a bases-clearing double. In the seventh, Chatham added two more on a sacrifice fly from Caden Grice and an RBI single by Matthew Hogan.

The Sox got one hit off McFarlane in the bottom of the seventh but never had a runner in scoring position after the second inning. Pickler noted that Chatham did late what the Sox didn’t do early – driving in runners on base and putting up runs in succession.

“You win some early, and you win some late,” Pickler said. “Today they won it late.”

This was Chatham’s first road win of the season, coming into the day 0-10-5 in road games.

The Sox return to action in Brewster tomorrow at 5 p.m., their second trip to Brewster in four days. On Thursday, they won 3-0. Connor Markl will be on the mound for Y-D.