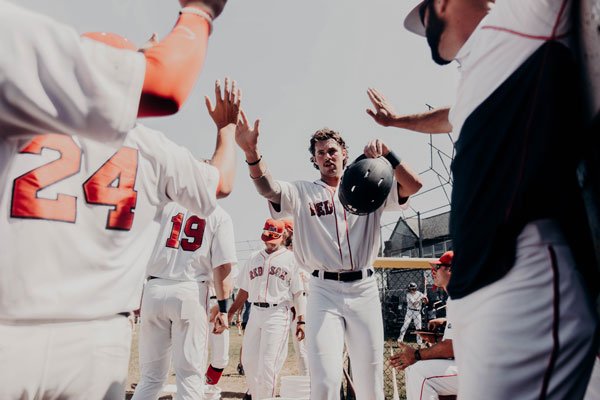 The Yarmouth-Dennis Red Sox got two early runs in the bottom of the first and never looked back, riding an impressive start from Grand Canyon’s Connor Markl the rest of the way Sunday night, beating the Falmouth Commodores, 4-0, in game two of a doubleheader. The Red Sox completed the sweep after a game one win.

Markl sparkled over six shutout innings, allowing just one hit and striking out eight. After Jared Lyons’ similar line in game one, the Red Sox got a combined 12 shutout innings from their starters with just two hits against, while they struck out 20.

“It’s crazy,” Markl said. “This pitching staff is by far the best I’ve been on. Everyone is really talented. Jared did a heck of a job today in the first game, and I tried to do what I could to the best of my ability.”

Y-D got on the board early when Xavier’s Luke Franzoni struck a two-out single to center, scoring Gunner Gouldsmith and Chase Meidroth. It was Franzoni’s second two-RBI hit of the day after a double in game one.

“Franzoni made an adjustment, we hadn’t seen him swing like that all year,” Y-D Field Manager Scott Pickler said. “He had two really big hits for us. That’s what this is all about — making adjustments.”

The Red Sox put up another in the third, as Meidroth swatted a sacrifice fly to center, scoring Homer Bush Jr. from third. They added a fourth in the fourth when Cole Carrigg scored on a wild pitch.

That was more than enough support for Markl, who put his full arsenal on display. His changeup fooled hitters into swings and misses, and his fastball hit its spots.

“I thought he threw really well,” Pickler said. “He varied all his pitches, and I thought he was really good.”

It was a big improvement from Markl’s first start of the summer last Sunday against Bourne, when he lasted just 2.2 innings and walked five batters.

He was noticeably more composed on the mound against Falmouth — he faced just one over the minimum, and only walked one batter.

“After that first start, I just worked on my mound command,” Markl said. “I tried to focus on command of my fastball and offspeed.”

Conner Thurman made his first appearance of the summer for Y-D in the seventh inning on the mound, but struggled a bit for control. He was backed up by Gunner Gouldsmith, who made a fantastic diving catch in right to open the inning.

But after two walks in a row, Pickler went to the bullpen and brought in Shaun Gamelin. Gamelin slammed the door with back-to-back strikeouts, securing the sweep for Y-D.

The Red Sox will look to keep the momentum going on Tuesday at Harwich after an off day Monday. First pitch is set for 6:30 p.m. from Whitehouse Field.