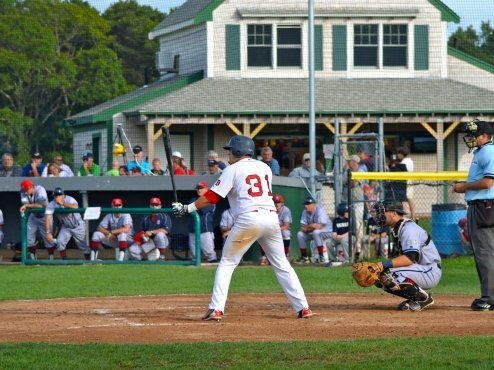 The Red Sox (19-15) ended their five game winning streak on Tuesday night with a loss to the East Division leading Harwich Mariners (20-12-2) at Red Wilson Field. The Sox fell behind early as a result of a four-run first inning, and were never able to get back into the game, thanks to a superb start by Mariners starting pitcher Zack Erwin (Clemson).

The Mariners opened up a 4-0 lead in the first inning behind a single by Anthony Hermelyn (Oklahoma) that scored two, and a two-run home run by C.J. Hinojosa (Texas). Harwich tacked on to their lead in the third inning. After getting two Harwich batters out, Staumont got Craig Aikin (Oklahoma) to ground to second, but first baseman Josh Lester (Missouri) dropped the ball and allowed the inning to continue. Harwich would go on to score three runs (all unearned) with two outs and take a commanding 7-0 lead over the Red Sox.

Harwich starting pitcher Zack Erwin (Clemson) was excellent in the game, going six innings and allowing only one run on two hits. All-star Rob Fonseca (Northeastern) scored the only run for the Red Sox off of a solo home run in the fourth inning.

The Red Sox fell to (19-15) with the loss, and Harwich moved to (20-12-2) with the win. Y-D is now two games back and four points behind the East Division leading Mariners. The Red Sox return home to Red Wilson Field for game three of their four game home stand when they take on the West Division leading Bourne Braves on Wednesday, July 23. First pitch is set for 5:00pm.?