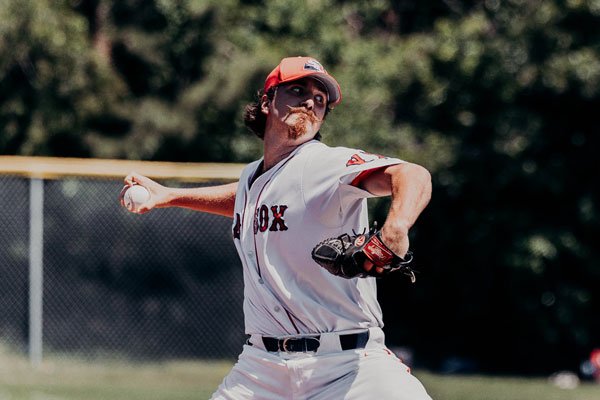 Jared Lyons dazzled on the mound for the Yarmouth-Dennis Red Sox Sunday afternoon, tying a Y-D record with 12 strikeouts in six shutout innings, and the Red Sox used a three-run fourth inning to defeat the Falmouth Commodores, 4-1, in game one of a doubleheader at Red Wilson Field.

Lyons tied the team record in the Cape League Pointstreak era, matching Mark Appel (7/27/11 vs. Bourne) and Daniel Savas (7/18/13 vs. Harwich). The George Mason pitcher allowed just one hit, walked two, and faced just one above the minimum over his six innings.

Lyons alternated between his fastball and a devastating curveball, at one point striking out seven in a row through the first three innings. He had eight Ks after three innings and 10 after four.

“I thought Lyons was really good,” Y-D field manager Scott Pickler said. “He was in command the whole day. He spotted up for us, he threw all his pitches for strikes. He kept them off balance the whole day.”

Offensively, Y-D put together a two-out rally in the fourth inning to take a 3-0 lead. With two men on, Xavier’s Luke Franzoni launched a two-run double into left-center field, scoring Chase Meidroth and Caden Connor.

Jack Costello immediately followed Franzoni with a single back up the middle, and Franzoni scampered home from second to extend the lead to three.

In the bottom of the sixth, Homer Bush Jr. supplied an insurance run, beating out a two-out infield single to score Hunter Haas from third to make it a 4-1 game.

Kris Bow entered for Lyons in the seventh. He gave up a leadoff homer to Falmouth’s Brayden Taylor, but settled down to lock down the win.

Lyons improves to 2-0 on the mound this summer. He’s thrown 15 shutout innings, allowed just five hits, and struck out a league-leading 22 batters for Y-D.

The Red Sox and Commodores will play the second game of their doubleheader at 5 p.m.

1 thought on “Lyons dominates with 12 Ks, Y-D beats Falmouth, 4-1, in game one of doubleheader”