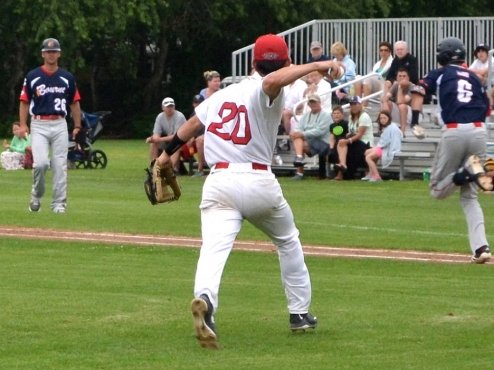 While Cole Billingsley (South Alabama) extended his record streak, the Yarmouth-Dennis Red Sox (16-15) were down early to the Bourne Braves (14-15) and couldn?t come back.

The 4-0 loss marks the end of a five game winning streak by the Sox that dated back to July 10th.? Along with a Chatham Anglers (17-14) win, the Red Sox fell to fourth in the West Division.

With a single in the fifth inning, Billingsley extended his hitting streak to a league-high 13 games. He now leads the league with 122 at bats and has 37 hits on the season.

When asked whether he thinks about his hitting streak in games, he said, ?It?s not about me. We didn?t have much energy and we just didn?t bring it. I?m not thinking about my streak. I just want to play ball hard everyday, have fun, and make it about the team.?

Brandon Bailey (Gonzaga) earned his fourth loss of the season with five innings of work. He allowed six hits and three runs.? Coach Scott Pickler brought Christopher Viall (Stanford) in from the dugout for the sixth inning.

Viall pitched three innings and held the Braves to one hit and one run. He spoke about how it felt to finish the game after struggling recently and said, ?As a reliever coming in, you always try and put yourself in the same mental state. It?s always good to stretch out but anytime getting in is amazing in this league and this team.?

The Red Sox went down early and their offense couldn?t keep up. A misplay by Will Toffey (Vanderbilt) at third base in the first inning allowed the first run to score. Doubles from both Camden Duzenack (Dallas Baptist) and Vince Fernandez (Calif. Riverside) scored two more runs in the fourth inning.

With only six hits in the game by the Sox, Y-D wasn?t able to keep up with the Braves. No Red Sox player had a multi-hit game and there were no extra-base hits.

Tommy Edman (Stanford) went 0-for-4, which ended his 23 game on-base streak. It is still the longest on-base streak of the season for the Cape League.

The Red Sox take on the Harwich Mariners (13-17) on Saturday at 5 p.m. at Red Wilson Field. The Sox and Mariners have split thie past four matchups.