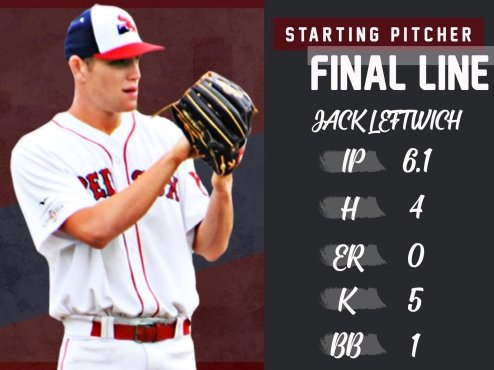 SOUTH YARMOUTH ? Florida pitcher Jack Leftwich had his best outing of the summer last night in a 5-0 win against the Bourne Braves. He struck out five batters and gave up just four hits and one walk in 6.1 innings of work. Chase Walter (Western Carolina) and Brady Corrigan (ASU) were spotless out of the bullpen, and the Red Sox offense strung together five runs on eight hits and three walks.

Pitching hasn?t been a strength for the Red Sox all summer ? Y-D has the second-highest ERA out of the 10 Cape League teams at 4.72. However, the Y-D pitching staff earned another round of pregame bullpen batting practice after shutting out the Braves. After his dominant performance, Leftwich now has a 3-1 record with a 3.64 ERA and 28 strikeouts in 29.2 innings pitched. Walter came in from the bullpen and struck out one and walked one in 1.2 innings of work, and Corrigan closed out the game by giving up two hits and striking out one in the final inning.

The Red Sox showed why they have the second-best offense in the league by producing five runs on eight hits and three walks. Top hitter Wyatt Young (Pepperdine) went 0-2 but walked twice, scored twice, and stole a base. He?s now batting .359, good for second in the batting title race behind Max Troiani (Bentley) of the Orleans Firebirds. In fact, Young has hit well over .300 since June 16, just the fifth game of the season.

Campbell started in 49 of 50 games for the Gamecocks this spring, primarily at second base. The Red Sox have struggled to find a consistent second baseman all summer, but it seems that Campbell has the position locked down. He looks comfortable in the middle infield and is heating up at the plate.

?I felt really good at the plate today,? Campbell said. ?Having the all-star game yesterday was nice. Other guys got a day off, but getting to see live pitching helped me stay fresh. I felt good coming out here today.?

The Red Sox scored two runs on three hits in the bottom of the first inning. Young led the game off with a walk, Beesley singled, Campbell hit in Young, and Wold singled in Beesley.

Y-D didn?t score again until the bottom of the eighth inning, when three batters reached home on three hits. Young led the inning off with a walk for the second time in the game, stole second, and came around to score after Wells drew a walk and Campbell singled into center field. Wold doubled on the next play to bring Wells in, and King singled into left field on the following play to make it a 5-0 game.

After trailing the Chatham Anglers by two points for several days, the 20-13-2 Red Sox are now tied for first place in the East Division with 42 points. The Firebirds remain in third place with 37 points.

The Red Sox will take on the 18-15-1 Wareham Gatemen ? the top offense in the league ? today at 12:30 p.m. at Dunkin Donuts Stadium in Hartford Connecticut.

Luke Waddell Streaks on: Team USA, Georgia Tech infielder, and former Y-D Red Sock Luke Waddell just wrapped up his stint with the USA Baseball Collegiate National Team. ?He ended with a .320 batting average ? third-best on the team ? with three doubles, five RBIs, and eight runs. He had a team-best hitting streak of seven games, and reached base all 14 games ? another team best. The United States finished with an 8-6 record.