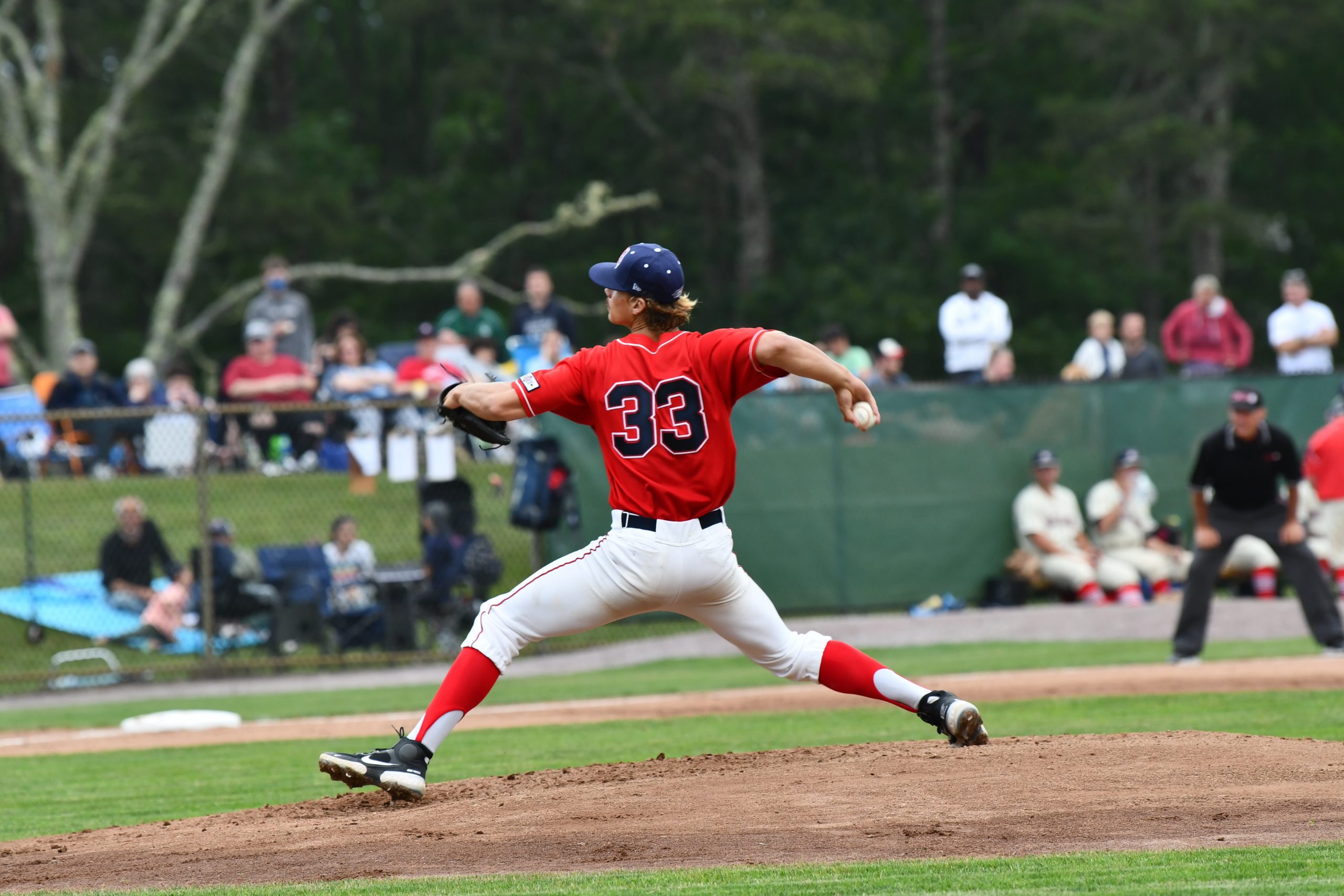 HARWICH – The Yarmouth Dennis Red Sox traveled seven miles east Monday night to face off against the Harwich Mariners at Whitehouse Field. Stellar pitching and defense mixed with clutch hitting resulted in a 3-0 victory for Y-D after Sunday night’s 5-5 tie.

Red Sox manager Scott Pickler, who is in his 23rd season with Y-D, had nothing but positive things to say about his starting pitcher and defense.

Zach Franklin (Western Carolina) picked up right where Thorpe left off, tossing a scoreless sixth inning that included a strikeout and just one hit. Right Fielder Briley Knight (Portland) contributed to the spectacular defense by throwing a missile to third base and doubling up the runner trying to tag up for the third out of the inning.

The game was at a standstill until the top of the seventh inning when the Y-D bats came alive. Peyton Graham (Cal Poly) led off the inning by ripping a single to left field, followed by Cade Hunter (Virginia Tech) who reached on an error by the second baseman. Pinch hitter Tanner Smith (Oregon) did his job by moving both runners into scoring position. With one out and runners on second and third, Briley Knight (Portland) came through with a base-hit RBI between the third baseman and shortstop to put the Red Sox up 1-0.

“It felt good, man,” Knight said. “It’s a good league and I’m just happy to have the opportunity to come out here and play with a great group of guys and great competition. I’m happy I could get the job done [after] missing the squeeze. [I’m] happy I could contribute to the team win there.”

Later in the inning, Wyatt Hoffman (University of Pacific) gave Y-D an insurance run when he belted a ball to deep right field that was deep enough to score the runner from third on a sac fly.

Reid McLaughlin (Brigham Young) contributed a strong relief performance in two scoreless innings, in which he allowed just one hit and struck out one batter.

In the top of the eighth with two outs, Peyton Graham (Cal Poly) plated Hunter Haas (Arizona State) from second base with an RBI single to left field that gave Y-D a little breathing room heading into the ninth inning.

With a 3-0 lead in the bottom of the ninth, New Englander Brand Dufault (Northeastern) took the mound to close the game out and sent the Red Sox home with a victory. Pickler …

The 1-0-1 Red Sox will take on the 1-0-1 Chatham Anglers at Red Wilson Field today at 5 p.m. Nick Dombkowski will get the start for Y-D. As a junior for the University of Hartford in 2020, he went 3-0 in three starts, logging 20 innings and accumulating 20 strikeouts — maintaining a 0.90 ERA, the best in the American East Conference.