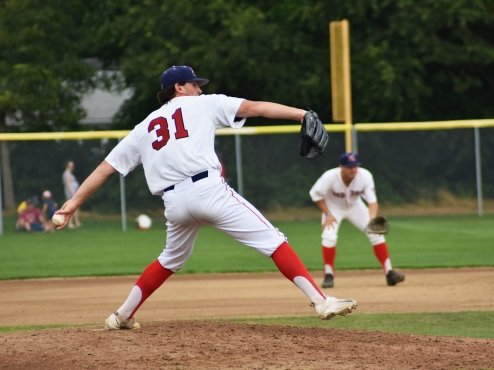 SOUTH YARMOUTH?The Yarmouth-Dennis Red Sox lost for the first time in over a week on Wednesday when they fell to Hyannis, 6-2.

Y-D simply did not look as sharp as they do on a typical evening, committing three errors during the contest and allowing six runs, the highest total against them since July 21st at Chatham.

Chandler Fidel (Little Rock Arkansas) made his second start of the season for the Red Sox, throwing two innings, allowing two runs (one earned) on four hits, and striking out three.

After Fidel, Ty Madrigal (St. Mary?s) gave manager Scott Pickler two innings. He fell victim to the shoddy defense in the contest, allowing an unearned run as the only blemish against him.

Mitchell Tyranski (Michigan State) was the next man out of the Y-D bullpen. Tyranski continued to right the ship after a dismal first outing of the season, lowering his season ERA to 4.21 with two scoreless innings of work in Wednesday?s contest.

The Sox got on the board in the fourth inning thanks to a two-out RBI single by Christian Koss (UC Irvine) to score Andrew Daschbach (Stanford). Koss brought home both Y-D runs on the day, hitting another two-out RBI single later in the game, this time the sixth inning, to move the score to 3-2 after six.

Sam Kessler (West Virginia) entered the game in the seventh and couldn?t hold the deficit to just one. The right-hander lasted just two-thirds of an inning and surrendered three runs on three hits and two walks.

The Red Sox bats went down quietly in the ninth.

Noah Campbell (South Carolina) is threatening to become the second hitter in four seasons to qualify for the batting title and hit at least .400. Campbell went 0-4 on Wednesday night, which means he has to go 4-4 in Thursday?s regular season finale to achieve the feat. Campbell trails only Matthew Barefoot (Campbell) for the league lead in batting average, .380 to .379.

The Red Sox double play in the fifth inning. With a runner on first and nobody out in a 3-1 game, first baseman Andrew Daschbach ranged to his right to field a grounder and start a 3-6-3 double play to retire Todd Lott (UL Lafayette).

The Red Sox are back in action Thursday evening. They will travel to Hyannis to take on the Harbor Hawks in the regular season finale; first pitch is scheduled for 6 p.m.