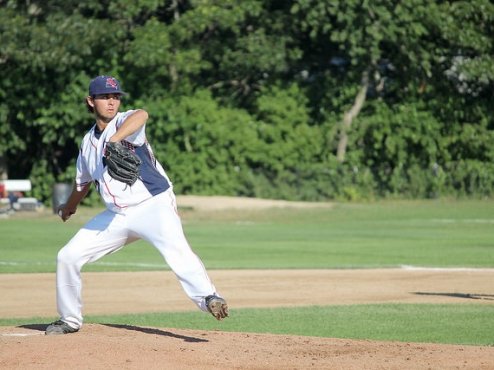 ?I?ve definitely been over there a few times,? Kauffmann said. ?I used to play (first base) back in high school. Just saw where the bag was at and I clipped it with my foot.?

Kauffmann threw a gem in the Red Sox 5-1 win over the Braves at ?Red? Wilson field. ?He was nearly unhittable through five innings and made numerous plays on the base paths that sealed his outing.

?Get the pitch count, keep it low, get all outs,? Kauffmann said. ?Just maximizing things, it allowed me to stay in the game longer.?

Prior to Monday, Kauffmann had made three starts.? His most recent start he went six innings, but prior to that his previous two starts did not surpass 2.1 innings.

In his nine appearances this season, he has only tossed 21.1 innings pitched, a low count for the now-starter. Manager Scott Pickler cited that as a reason why he left him out for so long.

?I wasn?t as worried as much about his pitch count,? Pickler said. ?He wasn?t throwing as well (at the start) as he is now. He?s come on strong for us at the end.?

Ever since arriving mid-way through June, Kauffmann has been a solid contributor for the Red Sox in a multitude of ways.? To go with his four starts, he also has four relief appearances, as well as one game finished, recording a save in his first appearance for Y-D against Chatham.

Kauffmann said that his pickoff move was another factor that kept him in the game.? In the fifth inning, after getting into a bit of trouble allowing Andy Atwood to single and advance to second, Connor Kaiser alerted Kauffmann when Atwood was jumping a little far off the bag.? Kauffmann made a quick move to the base and Kaiser laid down the tag, blanking the runner and eliminating the trouble.

Catcher Darren Trainor, who has caught Kauffmann twice after Monday, liked what he saw from his starting pitcher.

?He really competed today,? Trainor said. ?That?s a good hitting ball club (Bourne). If we could hold them to one run, we?re in good shape.?

He continued saying that Kauffmann?s stuff is always there, but the thing that set the right-hander apart today was his ability to command three pitches, something that Pickler echoed with his sentiment.

Losing Kris Bubic, the Red Sox have been making a lot of adjustments to its staff to ready for the playoffs on the next Saturday. Last Saturday saw Andrew Quezada make his first start, as the Red Sox are still in the process of determining its playoff rotation.

Kauffmann may have only made a few extended starts this season, but he feels it was only a matter of time until he got in his groove.

?I was starting to get loose, everything was falling in line,? Kauffmann said. ?Got the ball rolling.?